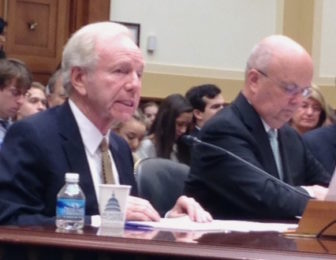 Former Connecticut U.S. Sen. Joseph Lieberman testifies on the Iran nuclear agreement before a U.S. House committee Tuesday. On the right is retired general Michael Hayden, former director of the CIA and the National Security Agency.

Washington – Reaction in Congress to the historic Iran deal ranged from condemnation to hope that it will curb Iran’s nuclear ambitions and eliminate a threat to the United States and U.S. interests in the Middle East.

Most Connecticut lawmakers praised President Obama for negotiating with Iran and other world powers, although former Sen. Joe Lieberman helped rally opposition to the deal.

Rep. Joe Courtney, D-2nd District, said the agreement “is a hopeful development in a region of the world that needs a new dynamic towards peaceful resolution of conflict.”

“As a supporter of the harsh sanctions regime that brought the parties to the negotiating table, I am under no illusion that Iran’s concessions are the result of any sudden epiphany of goodwill.”

Sen. Chris Murphy, D-Conn. , a member of the Senate foreign relations committee, said, “The best way to stop Iran from obtaining a nuclear weapon is through diplomacy, not war.”

“At a time when the Middle East is awash in crippling violence, we have an opportunity to address one of the most dangerous threats to the United States and the region through a negotiation, and I congratulate President Obama, Secretary Kerry, and their team for the agreement that was reached today. I know it was a long road,” Murphy said.

Under the agreement, economic sanctions imposed by the United States, the European Union and the United Nations will be lifted in return for Iran’s agreeing to long-term curbs on a nuclear program that many suspected was aimed at creating a nuclear bomb. It is a political victory for both President Obama and Iranian President Hassan Rouhani.

Most Democrats, even as they rallied around Obama  Tuesday, adopted a wait-and-see attitude, saying they needed to read details of the pact before making a final judgment.

Rep. Jim Himes, D-4th District, said “under no circumstances should anyone rush to judgment.”

“While our common hope may be that diplomacy has succeeded in barring an Iranian path to nuclear-weapons capability, Congress must apply exacting standards and strict scrutiny, especially given Iran’s history of deceit and international law violations,” Sen. Richard Blumenthal, D-Conn., said.

Rep. Elizabeth Esty, D-5th District, said, “as with any nuclear arms deal, we must evaluate this proposal not based on trust and faith, but on cold, hard analysis of what best advances the national security interests of the United States and what best enhances global stability.”

Rep. Rosa DeLauro, D-3rd District, said “as a supporter of strong sanctions I will carefully review this deal to ensure it contains the highest standards — not based on trust, but on verification — to keep Iran accountable, allow for rigorous international inspections and ensure that Iran will not have access to nuclear weapons.”

Rep. John Larson, D-1st District, said he would discuss the “historic” agreement with constituents at the West Hartford Town Hall on Sunday.

Obama said the deal is “not built on trust; it is built on verification.”

Invited to testify at a House Foreign Affairs Committee hearing on the Iran deal, Lieberman said the agreement “is a bad deal for America, a bad deal for Iran’s neighbors in the Middle East and a bad deal for the rest of the world.”

He predicted “a much more violent and potentially explosive Middle East.”

“We’re dealing with a country that has proven over and over again that it won’t play by international rules,” Lieberman said.

Israel also condemned the agreement, as did GOP leaders in Congress.

They said Iran will be able to clandestinely continue work on its nuclear program and the end of sanctions will allow Iran to sell more oil and use the money to purchase conventional weapons from Russia and other nations.

Sen. John McCain, R-Ariz., said “all signs point to this being a bad deal.”

“The result, I fear, is that this agreement will strengthen Iran’s ability to acquire conventional weapons and ballistic missiles, while retaining an industrial-scale nuclear program, without any basic change to its malign activities in the Middle East,” McCain said.

Congress has 60 days to review the agreement and vote on it. Obama on Tuesday said he would veto any attempt to block the agreement.

Lieberman said there is a chance Congress could override that veto. A two-thirds majority in each chamber is needed to override a presidential veto.