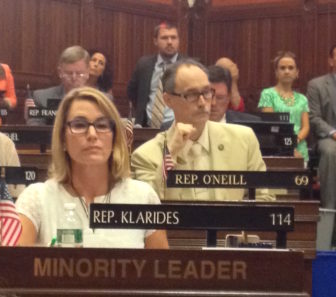 Minority Republicans in the state House of Representatives were able to force a debate Monday on a potential override of a Gov. Dannel P. Malloy veto.

The GOP lacked the numbers to successfully reverse Malloy’s veto of a bill that would have set new qualifications for the state’s education commissioner.

But they did team with 20 Democrats to demonstrate that three-quarters of the representatives who attended Monday’s special session were prepared to override the governor on this issue.

Technically, the effort failed despite 62 House members voting to override the governor with just 21 representatives opposed. According to the state Constitution, two-thirds of the 151-member House – 101 representatives – must support an override effort for it to be successful. Similarly, had the bill cleared the House on Monday, it also would need support from 24 of the 36 senators to complete the override.

But it never got that far because only 93 of the 151 House members attended Monday’s special session, which is required by the Constitution to consider potential overrides of any vetoes from the just-completed regular legislative session.

Leaders of the Democratic majorities announced Friday that there wasn’t enough support in either chamber for an override. The only bill expected to possibly be under consideration was a vetoed measure that would require education commissioners to have experience as a teacher and school administrator. The legislation, sought by labor unions, was a reaction to teachers’ displeasure with Malloy’s first commissioner, Stefan Pryor, whose primary education credential was as a co-founder of a charter school in Connecticut but whose career was in economic development positions.

But while House Republicans, who control just 64 out of 151 seats, knew they lacked the numbers to secure an override, they recognized Monday morning that they did have the right total for something else.

The GOP had 46 members present at Monday’s veto session, while only 37 of the chamber’s 87 Democrats attended. And it takes only a simple majority of those present effectively to amend the agenda and force a debate.

House Minority Leader Themis Klarides, R-Derby, then moved to debate the bill, and House Speaker J. Brendan Sharkey, D-Hamden, deemed it approved after waiting for any objections from the floor.

Klarides said it was important to discuss the education bill Malloy had rejected, even if that was all that was accomplished Monday.

The measure would have required the education commission to have five years of teaching experience, three years of administrative experience and a master’s degree in education or an education-related field.

“Those parameters seemed reasonable to this chamber,” Klarides said, noting the bill originally passed the House 138 to 5, while the Senate approved it unanimously.

“It’s a minimum requirement of what an education commissioner should have,” she added.

Rep. Andrew Fleischmann, D-West Hartford, co-chair of the Education Committee, said that since the bill was originally passed, the Malloy administration has expressed concerns that this could disqualify good applicants for the commissioner’s job in the future.

“Those are very legitimate concerns,” Fleischmann said, adding that he’s confident the matter could be resolved in the future through talks with the governor.

“Can this be considered the beginning of an ongoing dialogue?” Fleischmann said. “The answer I received was a very clear, unqualified ‘yes.’”

“We respect the legislature’s process and are pleased the veto was sustained,” Malloy spokesman Devon Puglia said. “We look forward to working closely with lawmakers to make next session even more productive than this one.”

But 18 of the House Democrats who attended Monday’s session voted to override the governor.

“I believe it was a good bill we passed,” said Rep. Cathy Abercrombie of Meriden. “I believe it was good public policy, and I don’t believe there was any downside to our voting to override.”

“Anyone who’s going to lead our school system should have a good idea of what’s going on in the classroom,” said Rep. Daniel Rovero of Killingly.

But Democrats had enough senators in the chamber to block Fasano. Majority Leader Bob Duff, D-Norwalk, never let it come to a vote.

Immediately after Lt. Gov. Nancy Wyman, who is the Senate president, called the session to order, Duff moved that it be adjourned since no business was on the clerk’s calendar.

Duff defended the decision afterward. Any motion by Fasano to add business to the calendar would have failed, and Duff said the minority leader’s only motive “was just to embarrass the governor. I wasn’t going to stand for that.”

Fasano said Duff couldn’t be sure all Democratic senators would have tried to stop an override debate, noting that the bills the GOP wanted reconsidered all had passed the Senate unanimously during the regular 2015 session.

“These weren’t close calls,” Fasano said, adding that the message from Senate Democratic leadership was clear: “‘We’re not interested in what you have to say.’ … That’s one-party rule. That’s dictatorship. That’s embarrassing.”