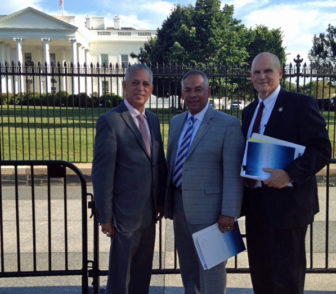 Washington – Mayor Pedro Segarra and Hartford Police Chief James Rovella were among dozens of officials invited to the White House Thursday to help President Obama promote a policing initiative aimed at preventing the types of police shootings that touched off riots in Ferguson, Mo., and Baltimore.

Grasping a copy of the White House’s Task Force on 21st Century Policing, Rovella said he has applied for federal funds to implement one of six “pillars” of the report – the one that aims to upgrade police procedures and strengthen oversight and transparency.

To Rovella, the most valuable aspect of the day-long series of seminars, capped by an event that featured U.S. Attorney General Loretta Lynch, was “the experience of sitting down with other jurisdictions and kind of exchanging ideas of what works and what doesn’t.”

The task force was formed in December after a series of high-profile deaths at the hands of police and public protests calling for greater accountability.

But even with the support of a police department like Hartford’s, it will be difficult for Obama to persuade all of the nation’s 18,000 separate law enforcement agencies, who have a strong preference for local control of local issues, to adopt new policing methods recommended in the task force’s report.

Some of the report’s recommendations – such as the use of body cameras – may also be too costly for a  police force budget.

Yet Segarra said “the policing climate needs to change.”

The task force report called for a “a broad range of diversity including race, gender, language, life experience, and cultural background to improve understanding and effectiveness in dealing with all communities.”

Finding that type of diversity had been hard for many police departments, even those like Hartford’s that says it is trying to hire more minorities.

There are also lingering effects of past problems. 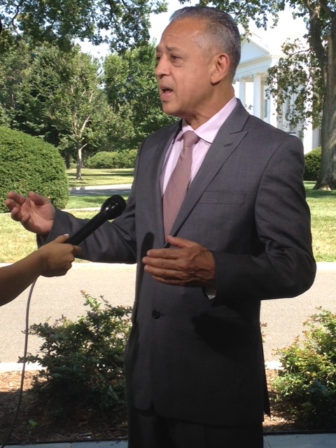 Hatford Mayor Pedro Segarra in Washington being interviewed after the community policing conference.

For example, a lawsuit stemming from the fatal shooting of a 19-year-old Latino man by a Hartford police officer in 1969 resulted in a federal court consent decree that set guidelines for the training, supervision and use of deadly force in the department. The Hartford police are still under federal oversight because of that shooting in what is considered one of the longest-running cases of its kind.

Segarra said he is trying to open more “pipelines” between the minority communities and the police department by tapping high school students for internships and summer law enforcement jobs.

Hartford has also had a recent spike in gun violence, which has left 18 people dead and many more wounded. Segarra said one reason for the spike is “a much higher re-entry rate” of people who are leaving jails under new state policies.

The town of East Haven was also subject to a 2009 Department of Justice civil rights probe that found a pattern of police discrimination and bias against Latinos. The town entered into a consent decree that required a number of changes in its police department.

Lynch was in East Haven this week to promote the Task Force on 21st Century Policing report and highlighted some of those changes.

“It talks about all the angles that are important to the community,” he said.