Murphy argues for giving Iran deal — and diplomacy — a chance 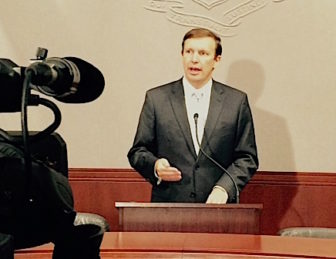 Washington – Even as he’s stopped short of embracing the deal, Sen. Chris Murphy has become an ally in President Obama’s efforts to shore up Democratic support for a proposed Iran trade pact that’s become a punching bag for Republicans.

Since the pact was unveiled last week to scathing reviews by Republicans in Congress and on the presidential campaign trail, Murphy, D-Conn., has taken to the Senate floor, appeared on television and made speeches at think tanks to urge lawmakers to give the agreement a chance.

As Secretary of State John Kerry was pilloried this week by Republicans on the Senate Foreign Relations Committee who said the United States had been “fleeced” and “bamboozled” by Iran, Murphy laid out five reasons to back the pact. Those included the proposition that rejection of the deal would end the president’s ability to conduct diplomacy.

“Senator, I think you hit the nail on the head,” Kerry responded.

To Murphy the future of the pact, negotiated by Iran, the United States, the four other permanent members of the United Nations Security Council plus Germany, is vital to U.S. interests as it is aimed at curbing Iran’s nuclear ambitions. But he says something larger is at stake – the very future of diplomacy – and as such he’s trying to act as an honest broker of the controversial agreement.

“I’m trying to make the case for the legitimacy of diplomacy,” Murphy told the Connecticut Mirror. “A rejection would weaken the president’s ability to negotiate abroad.”

Murphy has said he’s “generally supportive” of the proposed agreement, pending his need to verify the mechanisms for U.S. inspections of Iranian facilities that could produce nuclear weapons.

“I’m going to review every inch of the deal,” he said.

But he’s also said the United States would be a loser if Congress does not allow the Obama administration to honor the pact.

In May, Congress approved a bill that gave lawmakers 60 days to review an Iran deal and vote on it. A rejection would prohibit Obama from waiving economic sanctions on Iran — the crucial element of any agreement under which Iran rolls back its nuclear program.

Republican opponents say Iran will inevitably cheat and use the influx of money that a release of sanctions would bring to speed the development of a nuclear weapon and further  support of terrorist groups in the Middle East.

To Murphy, rejection of the pact would leave the United States isolated, because U.S. allies, who are not encumbered by their legislatures, would lift their sanctions anyway.

Murphy also says rejection of the pact would eliminate U.S. abilities to carry out inspections in Iran and could boost the fortunes of Iranian hardliners.

“I’m talking about it in any forum I can find,” Murphy said of the agreement.

He has also met with lawmakers one-on-one. This includes discussing the Iran pact with a key undecided Democrat, Sen. Charles Schumer of New York, over dinner this week.

Like Schumer, Sen. Richard Blumenthal, D-Conn., says he is truly undecided about the deal.

Not a single Republican is expected to support the deal. So the strategy for the White House is to have enough Democratic support in the Senate to maintain a filibuster of any legislation that would scuttle the pact.

If that fails, the White House hopes there are enough Democrats in the House and Senate who would help the president maintain a veto of the legislation. A two-thirds majority in each chamber would be needed to override the veto.

Murphy said he isn’t lobbying anyone to support the pact, at least not yet, because he hasn’t made up his mind himself.

But his challenges to the GOP’s bashing of the pact are already helpful to the White House, as are his defenses of what he views as the pact’s potential benefits. 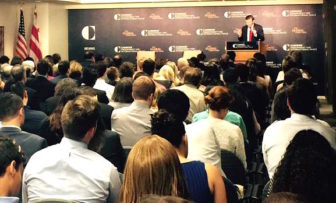 Sen. Murphy discusses the Iran nuclear pact during an appearance at this week at Carnegie Institute, a Washington think tank.

“Senator Murphy will be helpful with those that have an open mind,” said George Perkovich, an expert on nuclear strategy and nonproliferation at the Carnegie Endowment for International Peace.

He’s the highest-ranking Democrat on a Senate Foreign Relations Committee panel with jurisdiction over the Middle East, and has already made his mark with his opposition to Obama’s plans to bomb Syria to take out  Bashar al-Assad.

“At a time when there are few members of Congress who seek to become experts in foreign affairs, Senator Murphy stands out,” Perkovich said.

He said Murphy “demonstrates a great deal of thought and reflection” on foreign affairs, which have become stridently partisan.

The Carnegie Endowment for International Peace invited Murphy to speak about the Iran pact this week. He accused Republicans of “being afraid of diplomacy,” and condemned “the vitriol spewing forth” about the agreement.

But he also told a large audience assembled at the think tank “I need to make sure the inspections are as the administration claims…I need to know this backwards and forwards.”

Perkovich said there’s no political benefit for Murphy to take such a leading role in foreign affairs. His position on the Iran deal is almost certain to guarantee that no member of AIPAC, the powerful American Israel Public Affairs Committee, donates any money to his campaign, Perkovich said.

In fact, he said, a seat on the Senate Foreign Affairs Committee isn’t a big campaign fundraising draw in general.

“You don’t get elected on foreign policy,” Perkovich said. “It’s all a downside. People are going to say ‘why are you paying attention to this and why aren’t you widening our roads?”

AIPAC, which has spent more than $1.6 million lobbying against the pact this year, declined to comment on Murphy’s campaign to promote diplomacy with Iran.

Instead, AIPAC said, “We are engaged in a major bipartisan educational and lobbying effort against the deal and for a better deal – this includes grassroots contacts with all members of Congress, lobbying in Washington and supporting the efforts of Citizens for a Nuclear Free Iran.”

Citizens for a Nuclear Free Iran is a new group that will spend more than $20 million in ads opposing the pact.

Geoffrey Skelley of the Center for Politics at the University of Virginia, said, “The general public seems to have pretty mixed views about the deal, so I don’t think Murphy’s defense of the deal will be particularly costly to him.”

But, Skelley said, if public opposition to the deal rises, “there could be repercussions for Murphy and others.”

“There are many more developments to come in the debate over the nuclear agreement,” he said.

To Gary Rose, head of the political science department at Sacred Heart University, Murphy’s position on the Iran deal is strictly ideological.

“It’s really a left-right kind of issue,” Rose said. “He’s in line with the progressive wing of the Democratic Party on foreign policy.”