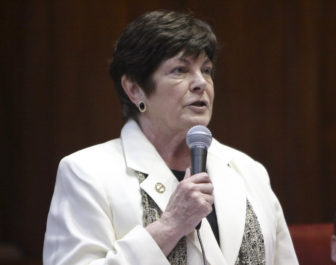 Eileen Daily speaking in the Senate

Former state Sen. Eileen Daily of Westbrook, who died early Thursday, was remembered as a devoted friend, a shrewd negotiator and a calming force who helped shepherd Connecticut through one of its worst fiscal crises.

Daily, who battled for four years a lung cancer diagnosis that was expected to claim her life in just a few months, died at the Connecticut Hospice in Branford. She was 72.

“If I was going to use two words to describe her, I would say direct and loyal,” said Mary Finnegan of South Windsor, the longtime legislative committee administrator who retired earlier this year. “She was a woman of very few words, but immense character and intellect. She wasn’t just my boss, she was my friend.”

“I’ve never met anyone that I admired more than Eileen Daily,” Senate President Pro Tem Martin M. Looney, D-New Haven, said. “She had just an extraordinary sense of serenity and purpose. When we lost our focus, Eileen would often be the one to draw us back to our purpose, to do the right thing for the people of Connecticut.”

Both Democrats, Looney entered the Senate with Daily in 1993, and said her focus immediately became clear.

“No one could ever pressure or intimidate Eileen on anything,” he said.

Department of Revenue Services Commissioner Kevin B. Sullivan, who was president pro tem of the Senate from 2001 through 2004, described Daily as “irascible and inscrutable. But she was a dear heart under that sometimes gruff Irish exterior.”

Sullivan described Daily as a close friend and invaluable colleague, both in the Senate and later as someone who helped him adjust to his role as the state’s chief tax administrator.

“Obviously I’ve lost a good friend and one of the people I most relied on in my years serving with her,” he said. “She made that transition for me a whole lot easier than it might have been.”

A Boston native, Daily served 14 years in Westbrook on the Board of Education and as first selectwoman. She began her tenure in the Senate leading the Environment Committee.

Daily became good friends with Gina McCarthy, who was Connecticut’s commissioner of environmental protection in the mid-2000s, and now serves as administrator of the U.S. Environmental Protection Agency.

“Eileen Daily was a gifted senator, a powerful women, a caring mom, daughter and sister, and my great and loyal friend,” McCarthy said. “While I will miss her terribly, I will do my best to take time to celebrate her truly rich, colorful life. Eileen Daily may have left our shared roots in Dorchester to head to fame and fortune in Connecticut,  but she did not leave her Irish behind.   You could see it in her eyes as she worked the budget on the Senate floor and hear it in her laugh which could melt away your troubles and turn an everyday meal into a fun-filled memory.”

In 2003, Daily began a 10-year stint as co-chair of the powerful Finance, Revenue and Bonding Committee. That panel, which has jurisdiction over legislation dealing both with taxes and borrowing, was under heavy pressure from 2008 on as Connecticut fell into – and struggled to climb out of – The Great Recession.

Friends recalled that even as that panel would have to grapple with one of the largest budget deficits in Connecticut history, Daily neither panicked, nor was swayed by political grandstanding.

“I not only admired her, but I was a little in fear of her,” said Guilford Democrat Patricia Widlitz, a former representative who co-chaired finance with Daily from 2011 through 2014. “She was a strong chair and she ran the committee well.”

Widlitz recalled Daily as an excellent negotiator with a rare gift of achieving her goals while building consensus at the same time. “We were facing very difficult decisions, and we needed to bond with the whole committee to explain to the rest of the legislature and the public the pressures the state was under,” she added. “With Eileen, we always did it together.”

“She was probably one of the best political poker players that ever served in the state legislature,” Sullivan said. “You often didn’t even know she had won her hand until you got home. She really understood the place. She was old-fashioned. She understood what it meant to have relationships, to do your homework. We miss her a great deal already.”

Eileen was definitely one of the greats,” he said. “She had an ability to balance politics with good policy and never lost sight of her obligations of public service. It’s a sad day for Connecticut. She was an icon.”

“For six years, I sat next to Eileen Daily in the Senate Circle,” said Senate Minority Leader Len Fasano, R-North Haven. “I got to know her well and deeply admire the way she served our state. She was a tremendous leader who had the ability to command respect with few words. When she did speak, she was decisive, logical and people followed. She balanced that with a great sense of humor. This is a great loss for Connecticut.”

Candelora and Daily were close friends despite their opposing party affiliations, and the North Branford Republican remembered how they collaborated to reform management of the state’s cash pool.

The two legislators had expressed concerns after learning – several months after it had happened – that Gov. M. Jodi Rell had approved a borrowing plan to prop up the state’s checkbook without notifying the legislature.

Despite concerns raised both by the administration and by the treasurer’s office, Candelora and Daily secured passage of a bill requiring monthly cash flow reports to the General Assembly.

“She was really one of the good ones,” said Jeffrey Beckham, who had worked with Daily both as an attorney with the Legislative Commissioner’s Office, and then with the governor’s budget office during the Rell administration. “You would have to search high and low to find anybody who had anything bad to say about Eileen.”

“For decades, she was a tenacious fighter for her constituents and a committee chair who wielded enormous respect among colleagues – and she did it with a smile on her face,” Gov. Dannel P. Malloy said. “Eileen was one of the toughest elected officials in the state, yet her jovial disposition always made those around her feel at ease.  She represented the best of public service and politics.  She was tough, loyal, hardworking, knew the issues, and her word was always her bond.  This is a loss for all of us.”

Friends said Daily was as persistent at battling her illness as she was in pursuit of good legislation.

Originally told she had only a few months to live, Daily lived for four years after her diagnosis. She and her husband, Jim, spent much of that time with their two children and two grandchildren.

“I’ve always admired her, but over these past four years I’ve been inspired by her and how she handled her illness,” Finnegan said.

“Eileen was just very strong, very determined,” Widlitz said, adding that Daily fearlessly talked about the music and speakers she would want at her funeral, but never gave in to the cancer. “She got four more years, and the focus was her family, which was a wonderful gift.”

Calling hours for Daily will be held from 3 to 8 p.m., Sunday, at Swan Funeral Home in Westbrook. The funeral will be at 11 a.m., Monday at St. Mark’s Church in Westbrook. Memorial contributions may be sent to The Branford Hospice or to the Eileen M. Daily Scholarship administered by The Westbrook Foundation Inc.