Nail salons are ubiquitous, and so are labor violations 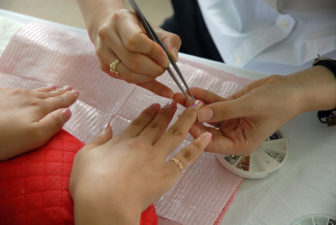 One salon paid its workers $4 an hour, less than half the Connecticut minimum wage of $9.15. Others failed to provide workers’ compensation coverage, pay overtime or keep payroll records.

In the state’s first systematic examination of the nail salon business, investigators fanned out to 25 salons and day spas, finding wage and hour violations at all but two – a 92 percent failure rate.

The investigation was prompted by a New York Times expose in May of the exploitation of salon workers in Manhattan, where immigrant workers were routinely cheated of wages.

“We definitely wanted to find out what the industry was like in Connecticut,” said Gary Pechie, director of the wage and workplace standards division of the Department of Labor.

Pechie said Monday that a one-day inspection tour on Aug. 3 of 25 salons chosen at random from Yelp, the online rating service, found an unprecedented degree of wage-and-hour violations.

The continuing investigations already have yielded more than $100,000 in penalties and recovered $47,350 in wages owed employees, primarily for failure to pay the hourly minimum, Pechie said.

Stop-work orders were issued that temporarily shut down 23 salons, all of which have reopened. They are:

Pechie said the unannounced appearance of two-person investigation teams, who came equipped with questionnaires in Korean, Vietnamese and Chinese, caused an uproar.

“The biggest pushback was from customers. ‘I have two fingernails done.’ The customers got really angry with some of my people. We had to back them off a little bit and say, ‘We’ll let them finish your whole hand,’ ” Pechie said.

A summer staple of Pechie’s division is inspecting construction sites for a common violation: Misclassifying employees as subcontractors, a dodge that saves contractors from paying workers’ compensation costs, giving them a competitive disadvantage over legitimate businesses.

The Times article by Sarah Maslin Nir was based on interviews with more than 150 salon workers and owners. She found wage-and-hour violations hardly were a secret.

They were advertised: “Asian-language newspapers are rife with classified ads listing manicurist jobs paying so little the daily wage can at first glance appear to be a typo. Ads in Chinese in both Sing Tao Daily and World Journal for NYC Nail Spa, a second-story salon on the Upper West Side of Manhattan, advertised a starting wage of $10 a day.”

The majority of salons in Connecticut are owned by Asian immigrants, and Pechie said his investigators found a widespread lack of understanding about rules for keeping payroll records, but nothing as egregious as an advertised daily rate of $10.

The voice of the industry in Connecticut is Moo Yong Lee, a prominent civic leader in the Korean community who has owned a martial arts studio in East Hartford since 1974, not long after he emigrated to the U.S.

“We are contacting and trying to set up a good relationship with the labor department, to get more educated,” said Lee, who represents the heavily Korean Nail and Spa Association of Connecticut.

Lee said Koreans own 395 of the estimated 900 salons in Connecticut.

Pechie said Lee and the association reacted constructively to the inspections by asking labor officials to conduct a one-day seminar on wage-and-hour laws. The event will take place Aug. 26 at a Korean church in Hamden.

Lee said many salon owners wrongly assumed they were exempt from the minimum wage, because their employees relied on tips, much like restaurant servers. He said the owners hope to lobby for a tip-credit law for salons.

“That’s kind of the ultimate goal,” he said.

Before the crackdown this month, the Department of Labor’s only action against a nail salon came in Greenwhich after workers complained that their wages were withheld.

The department, which employs 31 investigators and agents to enforce wage-and-hour laws, recovered $130,000 in back wages in that case.

“We think it’s important work,” he said. “When somebody works, they should be paid properly.”