“I know a lot of bad people in this country that are making a hell of a lot of money and not paying taxes,” Trump told Time in an interview this week. “The tax law is totally screwed up.” 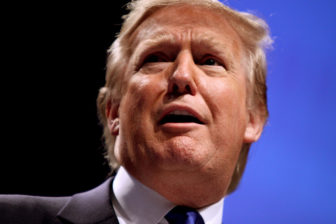 “They’re paying nothing, and it’s ridiculous,” Trump told CBS a few days later. “The hedge fund guys didn’t build this country. These are guys that shift paper around and they get lucky… The hedge funds guys are getting away with murder.”’

John Brunjes, chief legal officer at QSG Investment Management and a board member of the Connecticut Hedge Fund Association, said Trump’s comments are “chock full of flaws and errors.”

“It’s garbage in and garbage out,” Brunjes said.

The hedge fund industry is important to Connecticut. Greenwich is called the “Hedge Fund Capital of the World,” and the state is home to the nation’s largest hedge fund, $160 billion behemoth Bridgewater Associates.

What Trump is criticizing is that hedge fund managers make most of their millions and billions of dollars in carried interest, a fee on the gains of the money they invest for other individuals and institutions. That earned interest is taxed at 15 percent as capital gains by the Internal Revenue Service. That tax rate is lower than the one most Americans pay the IRS.

This may be one of the few issues on which Trump agrees with Democratic rival Hillary Clinton.

During her presidential kick-off rally on June 13, Clinton pointed out the disparity in the tax burdens of hedge fund managers and kindergarten teachers.

“While many of you are working multiple jobs to make ends meet,” she said, “you see the top 25 hedge fund managers making more than all of America’s kindergarten teachers combined. And, often paying a lower tax rate.”

Brunjes said he is not surprised by Trump’s latest campaign.

“He clearly has mastered how to put his finger on the populist feelings of the day,” he said.

Brunjes said carried interest is taxed at a lower capital gains rate because there’s always a risk in investing, “so you should get a preferential rate of taxation.”

“Instead of taking your skills and getting a job, you take your skills and put it into…creating a company,” Brunjes said. “That’s a different kind of application of a person’s talent.”

He also said others in the financial world besides hedge fund managers earn carried interest, including real estate agents.

Congress has considered changing the carried interest tax rate, but those proposals have not made much progress.

But now Trump has put the issue on the table, saying he would not mind having to pay higher taxes on some of the money he earns himself.