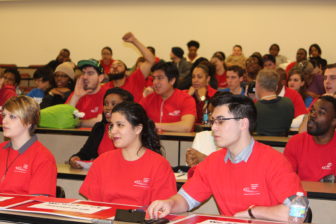 Students at Capital Community College protest tuition increases last March by chanting, “What’s it going to cost, Connecticut? More than we are willing to pay.”

Thousands fewer students showed up this week for the start of classes at the state’s community colleges – a 6.1 percent drop in students since last fall semester.

“We don’t offer the programs they are looking for,” Housatonic Community College President Paul Brodie told the Board of Regents’ Finance Committee Thursday.

These numbers reflect enrollment the first week of classes, however, students are able to enroll for two more weeks. Last year, a few hundred students enrolled during that window.

College officials on Thursday blamed the large decrease in enrollment at Capital on changes the governor made to the state’s financial aid program, which now funnels more aid to students who enroll full-time versus part-time.

“They have been dealing with less support from that program,” Erika Steiner, the college system’s budget chief said of the Governors’ Scholarship program.

College officials have been grappling with declines in enrollment for the last several years as the number of students in high school shrinks and fewer graduates subsequently head to college. The community colleges enroll 6,433 fewer students than in 2012, an 11 percent decline.

Officials say the cost of college may also be pricing some students out. It costs $4,042 a year to attend community college in Connecticut.

“They could be shy $200 for book expenses and don’t enroll,” Manchester Community College President Gena Glickman told the committee Thursday.

These declines will impact the schools’ $1.1 billion budget. Budget officials report they anticipate $9 million less in revenue from student tuition and fees.

The college system plans to mitigate the shortfall by continuing not to fill jobs as people leave, a less-than desirable approach to some board members and college presidents. The budget college officials approved earlier this year already assumed major savings from staffing reductions.

“I know we do a lot of saving through attrition. Are we able to do anything more strategic?” asked Matt Fleury, chair of the finance panel.

But college officials said all but 350 of the system’s more than 4,000 employees belong to a union, and the union contract largely restricts them from laying off tenured employees, even if it is done to better align college offerings. So college officials must find savings by not filling vacant positions, even if they are high-need positions.

“Our contractual obligations prohibit us from doing everything we would like,” said Glickman.