Labor blunter in its criticism of Malloy administration 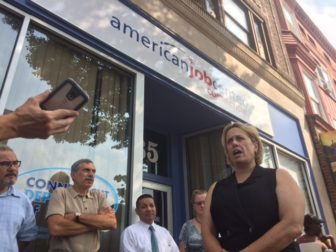 The immediate issue was the administration’s plan to downsize the state Department of Labor with 95 layoffs and the closure of five of the state’s 11 regional jobs centers, but fiscal pressure to further shrink government is likely to be a continuing source of friction.

“There’s clearly budgetary problems. We know that,” said Sal Luciano, executive director of Council 4 of the American Federation of State, County and Municipal Employees, which represents 16,000 of the state’s 40,000 unionized employees.

The rhetoric during a sidewalk press conference outside one of the closing jobs centers was surprisingly combative and personal, although the gibes were directed at “the administration” or its budget chief, Benjamin Barnes, not Malloy.

“We’re going to fight to keep these centers open, no matter what we’ve got to do. And that’s the end of it. Bottom line, we’re done. We’re fighting for these things, and get ready, because we’re coming,” said David Roche, president of the State Building and Construction Trades.

Lori J. Pelletier, the top leader of the state AFL-CIO, challenged Barnes to try to take a bus from Norwich, which is losing its jobs center, to surviving centers in Plainfield or Hamden.

“If he thinks it’s so easy…I’ll go with him,” Pelletier said. “I’ll even spring for the ticket.”

Three Democratic legislators in attendance distanced themselves from the Democratic governor, saying that the administration blindsided the legislature on the closings by keeping the plan secret until after the budget was adopted.

“I want people to understand: We had no knowledge of it,” said Rep. Catherine F. Abercrombie, D-Meriden, a co-chair of the Human Services Committee and member of the Appropriations Committee.

Caroline Raynis, an AFSCME steward who represents three centers, two of which are closing, said the downtown Meriden center costs the state only $17,000 in annual rent and is staffed by just two full-time employees.

“I also received a pink slip,” she said.

The press conference followed the AFL-CIO’s annual Labor Day breakfast, held this year at the Meriden hiring hall of Local 777 of the Plumbers and Pipefitters. Lt. Gov. Nancy Wyman represented the administration at the breakfast. Malloy did not attend.

The same breakfast a year ago, when Malloy was little more than two months away from his rematch with Republican Tom Foley, was an opportunity for Pelletier and Malloy to embrace behind a pragmatic message to union rank and file: Love Malloy or don’t, but know he is labor’s best friend in the race for governor.

“Walk the streets. Make the telephone calls,” Malloy urged a year ago. “Let’s make sure we have every conversation we can. Every door gets knocked on. Let’s make sure we continue the progress we’ve made over the last 3½ years in a second term – a stronger and better Connecticut, not just for some.”

With Malloy safely reelected and a string of major state employee contracts up for negotiation, labor is feeling freer to take on the administration when there are conflicts, such as the labor office closings.

The battles sometimes have the awkward vibe of a disagreement among friends intent on winning an argument without destroying relationships.

Sharon Palmer, a former AFL-CIO vice president popular in labor circles, has overseen the closing plan as the governor’s labor commissioner. Luciano noted that Palmer’s staff has found new jobs for 22 of the 95 workers to get pink slips.

“They’ve been wonderful about trying to move people, to help them get jobs,” he said.

But Luciano faulted the administration for failing to inform legislators a year ago when it became clear that federal funding for the jobs centers, some of it geared to jobless rates, was drying up as the state’s economy improved.

Pelletier was circumspect when asked if the job center issue was evidence of a larger conflict between labor and Malloy.

“They’re just being shortsighted on this,” Pelletier said.

On the administration’s part, the reaction to Friday’s criticism was muted.

“Friends can disagree on a matter of policy and remain friends,” said Mark Bergman, the governor’s spokesman.

He did not directly respond to the specific criticisms, instead reminding the unions of common victories: A law that will bring the minimum wage to $10.10 on Jan. 1, 2017, and passage of the nation’s first state law requiring that certain private employers offer paid sick days.