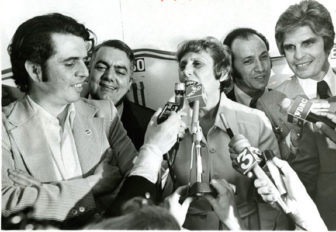 Nicholas R. Carbone, a 1970s Democratic power broker who schooled a generation of politicians and played crucial roles in the election of Ella T. Grasso as governor and the redevelopment of downtown Hartford, has died. He was 78.

Carbone died late Tuesday night or early Wednesday after a brief illness, said former Senate Majority Leader William A. DiBella, a lifelong friend who served on the Hartford City Council with Carbone and considered him a political mentor.

Carbone inspired a bracing mix of admiration, fear and suspicion as the wizard behind the curtain of Hartford politics, assembling coalitions of disparate racial, ethnic and philosophical factions in a turbulent, transitional period of urban politics and American life.

“He was by far the most powerful person in the city of Hartford in my lifetime,” said Thomas D. Ritter, a city hall staffer under Carbone who would become speaker of the Connecticut House. “There was a window of five years when nothing happened without Nick.”

Carbone crossed paths and, occasionally, crossed swords with an older generation of Irish politicians, including the legendary John Bailey, who managed what the impatient and sometimes impulsive Carbone could not – a 30-year run as a political power. But an eventual ally and friend was Bailey’s daughter, former U.S. Rep. Barbara B. Kennelly.

“He was a boss,” said Kennelly, who served on the city council with Carbone. She laughed and added, “Hey, I know bosses. I’ve dealt with them all my life.”

But Kennelly said city hall was an electric place under Carbone.

“I loved going to city council. I loved those four years,” said Kennelly, who left city hall after he election as secretary of the state in 1978. “It was action center.”

The 1970s was Carbone’s decade. As a streetwise party boss and early policy wonk — the unusual power broker who loved to study and experiment with policy — Carbone controlled city hall at various times as a councilman, deputy mayor and Democratic chairman.

“It didn’t matter what the designation was, he was the leader,” DiBella said.

Robert K. Killian Jr., the recently retired Hartford probate judge, recalled serving as an aide to U.S. Sen. Abraham Ribicoff when Carbone visited the Senate in the 1970s. Ribicoff introduced Carbone on the floor of the Senate as the mayor of Hartford.

“I’m the deputy mayor, not the mayor,” Carbone said.

“Oh, that may be the technical title, but we all know who runs Hartford,” Ribicoff replied.

Carbone established fruitful relationships with the corporate CEOs known then as “the bishops,” notably John Filer of Aetna, which helped the city revive its downtown with the construction of the Civic Center and CityPlace, still the city’s tallest office tower.

Carbone came of age in the South End of Hartford, a city then dominated by Irish and Italians. Blacks did not get representation on the City Council until the 1960s.

“He brought together an amazing conglomeration of personalities into city hall, and he was able to bridge the gap from old to new, from lily white to multi-hued,” Killian said. “And this from a guy, when he started off in politics, who was anything but a liberal.”

Killian called Carbone a “colossus,” one of the two smartest political figures he ever met, the other being Ribicoff, a governor and senator educated at the University of Chicago. Carbone was largely self-taught, though he eventually got a degree from the University of Hartford.

“Nick came along and changed the whole dynamic of politics,” DiBella said. In a time of racial tensions, he orchestrated African-American, Irish and Italian into a cohesive political organization that could swing nominations for statewide offices.

“I learned more from that guy than anybody in politics,” Ritter said. “He was the one who brought everyone together.”

But he was not always the conciliator.

Carbone’s early support of Grasso — in 1974 Hartford was a dominant force at state Democratic conventions — helped her become the Democratic nominee for governor over Killian’s father. But he quickly grew estranged from Grasso, who did not want to be pushed on policy by the new governor.

“I was shocked. She never appreciated what Nick did for her,” Kennelly said of Grasso. “I think it was one of the times I grew up in politics.”

With a laugh, Killian Jr. called Carbone’s backing of Grasso in 1974 a brief interruption in their long friendship.

To voters in Hartford’s growing suburbs, Carbone was a scary figure who pressed the suburbs, with litigation if necessary, to take on more of the regional social services burden that increasingly fell to the city. He was prescient in his insistence that Hartford needed revenue sources beyond a property tax that Carbone warned would be insufficient one day.

“The thing to me that made Nick an amazing individual was his continuous capacity to grow,” Killian said. “That was the hallmark of this guy.”

In 1974, an excited Carbone instructed staffers at city hall to read Robert A. Caro’s new book, “The Power Broker.” It was a nuanced, detailed portrait of how Robert Moses, holding a series of overlapping posts in city government, remade New York without holding elected office.

The book was many things: A history of how modern New York, defined by its transportation infrastructure, came to be; a compelling character study of a man who wielded power by understanding arcane laws creating quasi-public authorities; and, lastly, a cautionary tale of the corrupting effects of power.

Carbone viewed it, in no small measure, as a how-to guide for a politician laboring in a city governed by a charter that kept power diffuse. He directed aides to study the possibilities of quasi-public authorities in Connecticut.

If inspired by the Moses story, he could not replicate it.

Ultimately, he was an electoral failure. Not content to indirectly set city policy, Carbone challenged Mayor George Athanson in 1979, even though the colorful Athanson wielded no power under the city’s council-manager form of government and was personally popular.

He lost badly, and the Cabone political era was largely over, though he continued to be active into the new millenium as a policy adviser to legislators and advocacy groups. John Kennelly, the son of the former congresswoman, said Carbone gave him and others practical advice during a charter reform effort in 1999.

It barely fell short that year, but set the stage for passage of a strong-mayor form of government in Hartford. Carbone also played an instrumental role in the next decade as a member of a board that investigated police shootings. He also ran a municipal policy institute.

He always seemed to have a project, a cause.

“Prophets suffer their own indignities,” Killian said. “I guess the loss to George Athanson was one of them. He never looked back.”