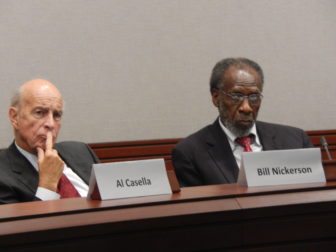 The panel studying Connecticut’s tax system got sobering news Wednesday morning in separate reports detailing the state’s struggle to recover from the last recession and the challenge of closing the wealth gap between the cities and wealthy suburbs.

But leaders of the State Tax Panel also reminded their colleagues that their role isn’t to solve these particular problems, at least not directly.

Rather the panel is tasked with finding ways to reform the tax system, making it simpler, less volatile, and poised to help Connecticut compete economically with other states.

And on a panel packed with current and former state legislators, and other state and municipal officials, it’s not easy to hear problems and not propose solutions, said panel co-chair William Dyson, a former representative and longtime leader of the General Assembly’s budget-writing Appropriations Committee.

“It is tough to hear these” challenges, Dyson said. “What we are confronted with are people’s perceptions of what the world’s like. And when these people have it, they are going to want to act on it.”

For example, Gov. Dannel P. Malloy’s budget office outlined how the state’s economy and tax system have evolved since the Great Recession ended more than five years ago.

Connecticut has regained 86 percent of the 119,000 jobs it lost in that downturn, and its unemployment rate, which peaked at 9.2 percent, now stands at 5.4 percent, budget analyst Manisha Srivastava told the panel.

But while employment in some high-wage professions, such as technical and scientific services, management, has grown, some key segments of the economy – financial services, educational services and manufacturing – either are growing much more slowly than they did before the recession, or are declining faster than they were beforehand.

“It’s the lower-wage industries that have been driving our recovery,” Srivastava said.

But outside of those reaction-driven bumps, growth in investment-related income tax receipts has been relatively modest since the last recession. That poses a significant challenge given that state government relies on the income tax receipts to support about 40 percent of all general fund spending.

This aspect of Pellowski’s report sparked a brief debate between three panel members. On one side, Malloy’s budget chief Benjamin Barnes and Revenue Services Commissioner Kevin Sullivan argued this demonstrates the importance of expanding the state’s emergency budget reserve, commonly known as the Rainy Day Fund.

“I think right now that would argue for making it a little bit larger,” Barnes said.

But the panel’s other co-chair, former Sen. William Nickerson of Greenwich – a longtime leader on the legislature’s tax-writing finance committee – said a big Rainy Day Fund can tempt legislators to support recurring service costs with one-time reserves when spending cuts should have been ordered.

“It can be used to make the budget more volatile,” Nickerson said.

“Let’s not do that,” Dyson intervened, reminding study panel members they have no authority to redesign the emergency reserve system.

The panel also heard a senior economist with the Federal Reserve Bank of Boston, Bo Zhao, who outlined the sharp differences in wealth among Connecticut communities, and its particular impact on non-education municipal services.

Despite an array of grants the state provides to communities, these have a “relatively limited” impact in terms of closing the gap between wealthy suburbs and urban centers, he said.

The economist’s analysis showed many wealthy communities receiving state aid still would hold a tremendous advantage in providing services to residents even without that aid.

Sullivan noted the state is “benefiting communities that are already benefiting from their natural position.”

“That is inescapably correct,” Nickerson replied, hinting at the longstanding political balancing act with which Connecticut legislatures long have struggled. Fairfield County, which holds much of the state’s financial services sector, has tremendous wealth, which means it’s communities generally need state aid the least, but also pump the most tax dollars into Connecticut’s coffers.

“Why are we sending aid there?” Sullivan replied.

“Maybe we’ll have some answers in December,” Dyson said afterward, referring to the panel’s Dec. 31 deadline to offer its tax reform proposals to the legislature.