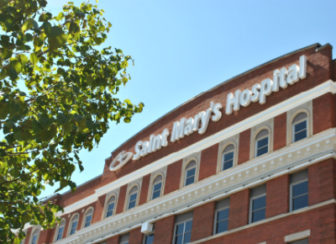 St. Mary’s Hospital in Waterbury announced plans to join a national nonprofit Catholic health care chain that will soon include St. Francis Hospital and Medical Center in Hartford, the latest in a flurry of moves by Connecticut hospitals to join larger networks.

Under the agreement, St. Mary’s would join Trinity Health, a Michigan-based company that is forming a New England network. The company already includes the Sisters of Providence Health System in Springfield, Mass., and is expected to include, as of next month, St. Francis Care, the parent company of St. Francis Hospital and Medical Center.

St. Mary’s President and CEO Chad Wable said in a statement that by combining forces, the hospitals would be able to improve patient safety, satisfaction and population health.

Trinity Health currently includes 86 hospitals and operates in 21 states. St. Francis President and CEO Christopher M. Dadlez is expected to become CEO of Trinity Health’s New England region, but Wable will continue as the chief executive of St. Mary’s, according to the announcement.

St. Mary’s is one of several hospitals currently seeking to join a larger network. Hospital officials say they see consolidation as key to their futures for both financial and care-delivery reasons. Larger organizations can gain economies of scale, while federal policies and insurers are increasingly pushing for changes to how care is paid for and delivered in ways that hospital leaders say is only possible in larger systems.

But others worry that consolidation could lead to higher prices and fewer choices for patients.

A new state law passed earlier this year, which grew out of legislators’ concerns about consolidation among hospitals and doctors, adds new restrictions on changes in hospital ownership. But those restrictions don’t take effect until Dec. 1, so by seeking approval before then, hospitals can have their proposed deals evaluated under current rules.

This is not the first attempt by St. Mary’s to join a larger network. It previously had an agreement with LHP Hospital Group, a for-profit hospital company, but that deal crumbled after it came to include Waterbury Hospital and plans to replace both facilities with one new hospital. State officials raised concerns about potential restrictions on reproductive services at the new combined hospital, and the deal eventually fell apart.

More recently, St. Mary’s was one of five Connecticut hospitals with plans to be acquired by Texas-based for-profit Tenet Healthcare. But Tenet withdrew from Connecticut in response to what it deemed overly burdensome conditions that the state regulator, the Office of Health Care Access, indicated it would impose on the company’s purchase of Waterbury Hospital, the first to go through the regulatory process.

All but one of the hospitals involved in the Tenet deal now have other plans to join larger networks. Waterbury Hospital is seeking to be acquired by Prospect Medical Holdings, a California-based for-profit health care company that also has plans to acquire Eastern Connecticut Health Network, the parent company of Manchester Memorial and Rockville General hospitals.

Bristol Hospital, which also had plans to be acquired by Tenet, has not announced plans to join a larger network, although it has partnerships for certain services with the Yale New Haven Health System.

Other transactions in the works include Johnson Memorial Hospital’s bid to be acquired by St. Francis and Lawrence + Memorial Hospital’s plans to join the Yale New Haven Health System. Day Kimball Hospital is in talks with Hartford HealthCare, the parent company of Hartford, Backus and Windham Hospitals, MidState Medical Center and The Hospital of Central Connecticut.

The plans by St. Mary’s to join St. Francis Care and Trinity Health require approval by state and federal regulators, as well as the Archdiocese of Hartford. Other approvals could be required by Canon law, according to the hospital.