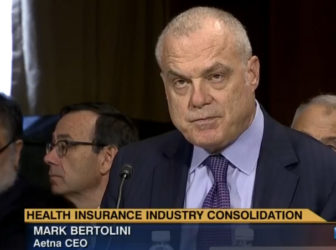 Washington – Skeptical members of the Senate Judiciary Committee on Tuesday questioned Aetna CEO Mark Bertolini and Anthem CEO Joseph Swedish about their plans to merge with other large insurers, citing concerns about the consolidation’s impact on consumers.

“I want to make sure these deals do not harm consumers by increasing costs and decreasing benefits,” said Sen. Amy Klobuchar, D-Minn.

Sen. Richard Blumenthal, D-Conn., said he is “deeply troubled by studies that show neither providers nor consumers benefit from (mergers.)”

Sen. Mike Lee, R.-Utah, who scheduled the hearing as chairman of the antitrust subcommittee of the Senate Judiciary Committee, said he was determined to find out why “the insurance industry is rapidly consolidating.”

Bertolini said Aetna’s merger with Humana would result in $1.25 billion in cost savings, which would help keep costs down for policyholders. He assured the senators that “robust competition would remain in the Medicare Advantage market.” Analysts say the merger would give Aetna-Human more than 25 percent of that market.

Bertolini testified that, “Aetna and Humana share a common culture,” and the drive to merge was driven by the hopes of “creating positive change in the health care market.”

Swedish, the chief executive of Anthem, said his company’s merger with Hartford-based Cigna “will uniquely benefit consumers” by expanding access to care through a more extensive network of doctors and hospitals.”

But other witnesses disputed those assessments of the proposed mergers, which are under review by the Antitrust Division of the Justice Department.

Richard Pollack, president of the American Hospital Association, testified the mergers, which would shrink the five largest insurers to three, “could be a blow to millions of health care consumers, as well as as the hospitals, doctors, and others who are working to improve quality and efficiency while making care more affordable to patients.”

“Simply put, the merger resulted in reduced payments to providers and no evidence those cost savings were passed on to consumers,” she said.

George Slover, an attorney with Consumers Union, also criticized the mergers, saying it would harm consumer choice and the ability of other insurance companies to thrive and move into new markets.

‘If (Aetna and Cigna) can’t expand on their own, how can small companies hope to grow?” he asked

Aetna has struck a deal to buy Humana for $37 billion, which would cover 33 million members. Anthem, a Blue Cross and Blue Shield insurer, wants to buy all of Cigna’s shares in a cash and stock transaction that would cost $54 billion and cover 53 million members.

Aetna and Humana on Friday both received “second requests” for further information in connection with the Justice Department’s review of the proposed mergers for potential anticompetitive issues. The companies also agreed to extend the review for another 30 days.

On Tuesday, Bertolini and Swedish provoked Sen. Al Franken, D-Minn., when they gave lengthy responses to his question: ”Do you commit to passing on your savings to policyholders?”

As they tried to respond, Franken repeatedly interrupted the insurance executives saying “that’s not quite an answer.”

Finally, the senator said, “I do think we could have gone quicker if those answers were ‘yes.'”

Blumenthal was perhaps the toughest questioner.

“I am deeply concerned about these mergers because of their potential effect on competition and the consolidation of power in fewer hands,” he said.

Blumenthal questioned Bertolini on the issue of “barriers to entry” of new and smaller companies into the market place, especially the small group and individual markets.

Bertolini responded that more providers are entering the market on the local level and Wall Street is making investments in insurance startups, including Google Capital’s investment in the new Oscar Health Insurance Corp.

“We are not at all concerned about the lack of competition in local marketplaces,” Bertolini said.

Swedish responded that “competition is becoming more robust, not less,” with increases in the number of insurers offering policies in state health exchanges.

“My hope is the Justice Department will look at national markets, not only the local markets, because insurance is not just local,” Blumenthal said.

Republicans on the panel seemed more sympathetic to the proposed mergers.

Sen. Thom Tillis, R-N.C., joked “market concentration is what I do when I’m at the grocery store and trying to figure out what my wife asked me to buy when I went there.”