FBI reports crime dropped across the board in Connecticut 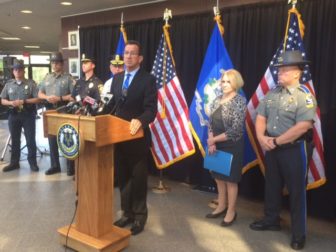 Violent crime in Connecticut dropped by nearly 10 percent for the second consecutive year, placing it among the states leading a long downward trend in the incidence of crime in the U.S., the FBI reported Monday in its annual release of the Uniform Crime Report.

Crime in Connecticut last year was at its lowest rate since 1974.

The release of the 2014 figures marks a continuation of a trend that began in the early 1990s, when most index crimes peaked in the U.S., leading to a long debate over whether demographics, public policy changes or a mix of the two were responsible.

Gov. Dannel P. Malloy stood with law-enforcement officials at the Department of Emergency Services and Public Protection later Monday to say that he believes the reduction reflects, at least in part, the state’s efforts to address homelessness and juvenile crime.

“I think there are year-to-year variables,” Malloy said, acknowledging a risk in hastily drawing correlations between results and public policies. “But you can’t deny a trend, and what we’re seeing in Connecticut is a trend where Connecticut is leading the nation in drops in crime on a back-to-back basis.”

The trend appears to be continuing in 2015, despite an increase in shootings in Hartford, Malloy said.

“This is more than one year’s snapshot,” he said.

In a study published in February, the Brennan Center for Justice called the 20-year reduction in crime “one of the nation’s least understood recent phenomena.”

Criminologists generally give some credit for the reduction in crime to the now-discredited boom in prison construction in the U.S., but the consensus is that dramatic rise in incarceration eventually became counter-productive. Policing also grew more sophisticated about the time crime began to fall.

The aging of the population cannot be the explanation for the differences among states, Malloy said.

New York saw just a three percent drop in the number of violent crimes per 100,000. New Jersey’s was 9.6 percent, the same as Connecticut.

The steepest drops in the incidence of crimes in New England were measured in Vermont (19.7 percent), Rhode Island (14.8 percent) and New Hampshire (12.1 percent). Massachusetts had a drop of 3.7 percent; Maine’s was 3.6 percent.

During the administration of Malloy, a Democrat elected to his first term in 2010, Connecticut phased in a major change in how juveniles are treated by the criminal justice system, reducing the crimes for which defendants can be prosecuted as adults before they turn 18.

“We know, statistically, when a minor goes to jail for anything but an overnight their chances of being committed to a life of crime or spending a substantial portion of their life committing crimes goes up dramatically,” Malloy said.

Earlier this year, the legislature accepted Malloy’s recommendation to eliminate or lower prison sentences for many non-violent crimes as a means to lower incarceration rates. Malloy said Monday the administration would seek further changes next year on how the criminal-justice systems treats young offenders.

Malloy said Monday his administration’s policies should be judged over time, using a variety of metrics, including recidivism rates tracked by the state.

The reductions in Connecticut as reported by the FBI were across the board, including drops of 2 percent in the incidence of larceny and motor-vehicle theft, 5.4 percent in murder, 8.3 percent in aggravated assaults, 11 percent in robbery and 12.2 percent in rape.

“We hope this information will become part of a balanced dialogue in communities and in the media—a dialogue that will help to dispel misperceptions, foster accountability, and promote transparency in how law enforcement personnel relate to the communities they serve,” James Comey, the FBI’s director, said in a statement.