7 hours of video released from inside CJTS and Pueblo Unit 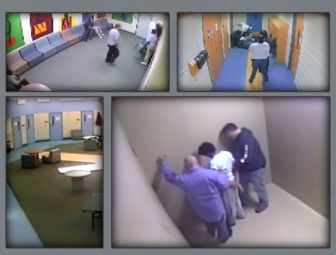 Watch the videos below

Under fire for what has been called improper restraint and seclusion of youths at state-run juvenile correctional facilities, the Department of Children and Families has released nearly seven hours of surveillance video in an effort to provide the public a more complete picture of its operations.

All of the videos were recorded this year – the most recent four months ago.

“Placing the videos on our website is part of our commitment to transparency and holding ourselves accountable,” said DCF Spokesman Gary Kleeblatt. “The videos – seen in this larger context – show that the staff have the most demanding and difficult jobs and that the overwhelming majority of staff demonstrate great commitment and care.

“At the same time,” he continued, “we know that improvements are necessary and, we are committed to reducing the use of restraints and seclusion.”

The conditions of confinement at the Connecticut Juvenile Training School for male adolescents and the Pueblo Unit for girls have been the focus of legislative hearings following  a state watchdog’s investigation that found what it termed “dangerous” and “unlawful” use of restraints and seclusion. The Office of the Child Advocate released videos showing incidents in which staff violently tackled and dragged youngsters into confinement, where some go on to injure themselves.

The videos released by DCF this week include some of the same videos released by Child Advocate Sarah Eagan, but additionally show other incidents in which inmates are restrained only after throwing a chair or starting a fight with other children at the facility. Other videos show youths watching television and staff sharing food with the girls at Pueblo.

The faces of staff members and the young people in custody are blurred in an attempt to protect their identity. In some of the videos, the recorded activity is taking place in the distance or off-screen in the childrens’ cells. The department released the videos without explaining what is transpiring.

Staff often record incidents of restraint with a handheld recorder that has audio. Some of those tapes were released by the Office of the Child Advocate but not by DCF.

DCF reiterated it is working to improve the conditions at the facilities and have begun implementing an action plan. Those changes include eliminating the use of face-down, prone restraints. Mechanical restraints are being phased out except when youths are being transported. Additionally, DCF said it will ensure that a clinical staff member is present every time a youth is restrained and will require counseling sessions during periods of seclusion. The role of clinical staff has been expanded so they work more closely with other employees.

“We must continue to support our staff in doing very difficult jobs. Ultimately the quality of service received by the youth depends on the men and women who work on the front lines with them every day,” said Kleeblatt.

The child advocate’s video on this youth, whom she calls Eleanor, can be found here.

The child advocate’s video on this youth, whom she calls Melvin, can be found here.

Youth restrained in the distance, brought into seclusion (Feb. 19)

Girl walks around Pueblo, talks to staff (May 15)

The video below shows an empty common area at Pueblo on May 15.

Girls at Pueblo watch tv, get food from staff

The videos that the child advocate released did not include this.

Staff talks with girl in computer lab, ends with her being restrained off camera (May 30)

Staff talks with youth, ends in off-camera restraint (May 31)