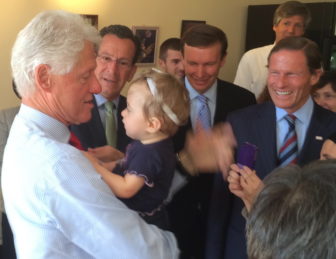 The next evening, the former president will be at the University of Connecticut in Storrs to accept the Thomas J. Dodd Prize in International Justice and Human Rights.

Clinton, who lives in Chappaqua, N.Y., helped raise money and get out the vote for the re-election last year of Gov. Dannel P. Malloy.

Malloy, who has endorsed Hillary Clinton’s candidacy, has a short trip if he intends to attend the fundraiser next week. Jepsen lives across the street from the executive residence.