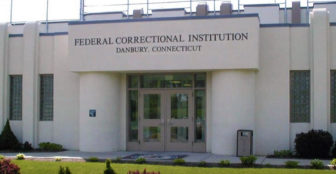 The Federal Correctional Institution in Danbury.

Washington – Federal officials said Thursday that 32 inmates  who had lived in Connecticut before their incarceration will be set free at the end of the month — part of the largest U.S. prisoner release in U.S. history.

Many, if not most, of the 32 will spend time in  halfway houses run by non-profits under contract with the federal government,  said Bureau of Prison spokesman Ed Ross.

Florida, with 295 released prisoners, tops the list, followed by California with 229 and Illinois, 213.

The prisoners regaining their freedom are the first wave of an effort to reduce overcrowded prison populations and scale back harsh sentences given to drug offenders in the past few decades.

The group of 32 inmates from Connecticut does not include an additional unknown number of criminal aliens arrested in the state who will also leave federal prisons — to be deported. It is also not known how many of the Connecticut inmates being released will be from the state’s only federal prison in Danbury.

“They could be anywhere in the Bureau of Prison system,” Ross said

All 32 listed Connecticut as their home before their incarceration.

Initially, more than 6,000 prisoners nationwide will have their sentences shaved by months and even years. About one-third are criminal aliens who will be deported.

Many of the inmates were small time drug dealers. But some have past convictions for robbery and assault and carrying semi-automatic weapons.

The initial 6,000-prisoner release is not expected to have a big impact on prison overcrowding, but the guidelines could eventually result in the release of about 46,000  drug offenders in the United States affected by the Sentencing Commission’s action.

Beatrice Codianni, managing editor of Reentry Central, a Connecticut-based online publication about criminal justice and reentry programs, said the prisoner release, while unprecedented, is “only a drop in the bucket.”

“But I’m ecstatic about the men and women who are getting out,” said Codianni, who served time in the Danbury prison.