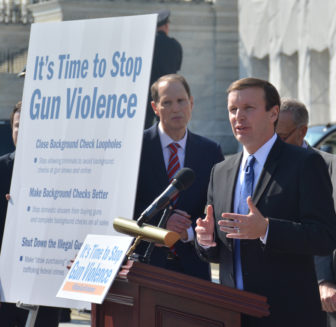 Sen. Chris Murphy has been an outspoken critic of Congress’s failure to pass any gun-control measure in reaction to the nation’s apparent epidemic of gun violence.

Washington – Reacting to the nation’s latest mass shooting in Oregon, Senate Democrats, including Richard Blumenthal and Chris Murphy of Connecticut,  said they would try once again to pass legislation first prompted by the mass slaying in Newtown.

Blumenthal and had planned a press conference in the Capitol Wednesday to promote  more modest legislation that would bar firearms dealers from completing a sale before the completion of an FBI criminal background. But those plans were postponed and on Thursday, the Connecticut senators helped roll out the more ambitious effort.

At Thursday’s press conference to outline the proposal, Murphy said that after the shooting of 20 first–graders and six adults at Sandy Hook Elementary School, the public expected Congress to act.

“They were met with deafening silence,” Murphy said.

These young men whose minds are becoming unhinged… they take cues from this total and complete silence from Congress,” Murphy said.

Blumenthal agreed with that sentiment, saying “Congress has been complicit… has aided and abetted the horrific slayings.”

Blumenthal also said he still plans to introduce his bill that would bar sale of a gun before a background check is complete and another that would target those who commit domestic violence.

Under existing law, the FBI has three days to provide evidence that a gun sale should be prohibited. If there is any delay, the sale can be completed on the fourth day, a loophole that allowed Dylann Roof to buy the gun he used to kill nine people at a black church in Charleston, S.C.

The bill also would also try to stop “straw purchases,” where one person buys a firearm for someone not legally allowed to own a gun.

The new gun bill would bar “domestic abusers” from purchasing a gun. Current federal law prohibits the selling of firearms to felons and those courts have ruled to be mentally ill.

The NRA accused the Democrats of trying to exploit the Oregon shooting, saying the gunman has passed a background check when he purchased his weapon.

In Connecticut, state lawmakers from both parties moved swiftly to tighten the state’s gun laws after the Newtown slayings.

But legislation similar to the bill Senate Democrats rolled out Thursday was rejected by the Senate on a vote of 54-46 in April of 2013, just months after the Sandy Hook shootings. Sixty votes were needed to end a filibuster of the legislation.

The bill’s sponsor, Sen. Joe Manchin, D-W.Va., said repeatedly he would not reintroduce the bill until he could be assured of securing 60 votes for the legislation.

But last week’s fatal shooting of nine people at Umpqua Community College in Roseburg, Ore. has shifted the political landscape.

On Thursday Manchin, a conservative Democrat and lifelong member of the National Rifle Association, said his legislation “made sense then… and makes sense now.”

“Don’t you think if we see a void we should fix it?” Manchin asked.

But Congress has become more Republican, and more conservative, since its last attempt to change federal gun laws. Most Republicans oppose those changes – as do some conservative Democrats.

Blumenthal, Murphy and fellow Democrats said they plan a national campaign to stir public support for the new initiative.

“It will say ‘Rise up America,’” Blumenthal said.

“In contrast, campaign contributions from anti-gun groups to Senators in the same period were negligible,” the Maplight report said.

But the NRA’s ability to spend tens of millions of dollars on attack ads may be more influential than gun-group campaign donations.

The new gun control campaign was announced just before President Obama travels to Oregon Friday to meet with the families of the shooting victims there.

Chris Cox, executive director of the National Rifle Association’s Institute for Legislative Action, said Obama ” proudly admits that he wants to politicize these horrific events to push his gun control agenda – and his allies in Congress are happy to do his bidding”

Like many Republicans, Cox said the issue of mass shootings would be better addressed by reforming the nation’s “broken” mental health system. 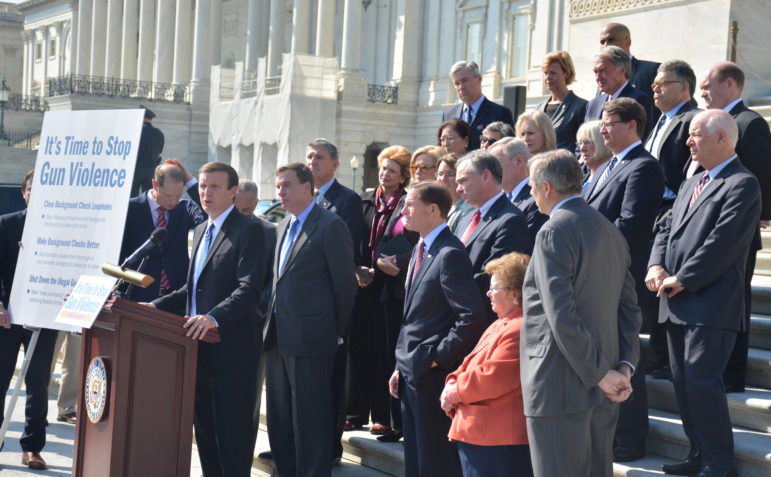 Sen. Chris Murphy at the podium stands before a large group of Democratic senators pushing for gun-control legislation. Sen. Richard Blumenthal is to Murphy’s right.