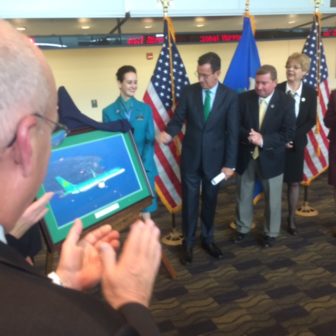 Windsor Locks –Aer Lingus’ commitment Wednesday to restore transatlantic service to Connecticut came after a year in which Gov. Dannel P. Malloy lobbied the Irish government, chatted up airline officials on his way to the Paris Air Show, enlisted local corporations and, ultimately, offered a $4.5 million guarantee against losses in each of the first two years, plus $5 million in other inducements.

Malloy happily set aside a week of fiscal tumult to celebrate the Irish airline’s decision to begin overseas service from Bradley International Airport, a long-held goal of the administration and business community.

“This has been a long time coming,” Malloy said, addressing reporters in the airport concourse and drawing curious looks from travelers. “In 2009, we lost our flight to Europe. One of the reasons we set up the authority was so that we could be more nimble and seize on opportunities.”

With bipartisan support, Malloy won passage in 2011 of a bill that delivered one of his campaign promises: the creation of a quasi-public Connecticut Airport Authority to manage Bradley and four smaller airports.

Kevin Dillon, executive director of the authority, said it would pay $3.8 million in marketing over three years and forgo about $1.2 million revenue by waiving various fees over two years. 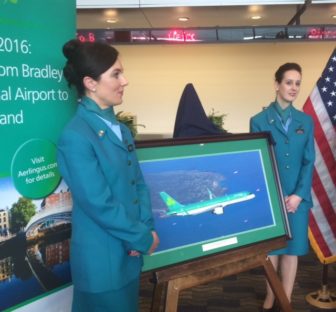 Aer Lingus will begin service the same month to Newark, part of a Northeast marketing strategy.

“Newark and Hartford are a key piece,” Foley said. “We wanted to be in this footprint of New England, where we’d have Hartford, Boston and New York, Newark, Washington. It gives us a huge ability to brand our product here, to spend money here without having to go across the country.”

The airline also is adding service this year to Los Angeles. It already flies to San Francisco.

KLM/Northwest abandoned service from Bradley to Amsterdam in 2009, during the recession. Foley said the market has improved since, but establishing Aer Lingus at Bradley will take work, even with the significant assistance from the authority and state.

“It’s going to take hard work. Anything that’s a no-brainer, somebody would have been here already,” Foley said. “So there is enough work for us to do to make sure it works, but Aer Lingus has been around a long time, and we tend to scrap above our weight.”

Joe Brennan, the president of the Connecticut Business and Industry Association, said his group was asked a year ago to judge potential demand among its members for Aer Lingus service to Dublin. The response was encouraging, especially among manufacturers with European ownership or customers.

“Dublin is a good hub, and it’s easy to get elsewhere from there. So we’re hopeful it’s a success,” said Brennan, who attended the announcement. “I think anything that puts a bright light on Connecticut, particularly now, having some good news, is a really important thing. It’s good to be able to talk about some positives.”