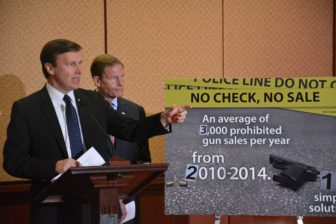 Washington – Joined by several of their Democratic colleagues, Sens. Richard Blumenthal and Chris Murphy on Wednesday fulfilled a promise to introduce a bill aimed at closing a “loophole” in federal gun laws that allows a gun sale to proceed if an FBI background check is not completed in 72 hours.

The senators say this flaw in the background check law allowed Dylann Roof to purchase the gun that was used in a deadly attack at a black church in Charleston, S.C., in June.

“No check, no sale must be the rule – enacted as law – to close a gaping loophole spreading the epidemic of gun violence,” Blumenthal said.

Murphy said “it makes absolutely no sense” for a gun sale to go through if the FBI cannot complete its background check within 72 hours.

“If it takes an extra day or two to make sure we’re not arming violent offenders, it’s worth the wait,” Murphy said.

Sen. Dianne Feinstein, D-Calif., also co-sponsored the Background Check Completion Act, which has the backing of 10 other Senate Democrats – but no Republicans.

The National Rifle Association says changes in the background check system aren’t needed and would not have stopped mass shootings like the one in Newtown in December of 2012, which resulted in the deaths of 20 children and six adults at Sandy Hook Elementary School.

But the Democratic senators say the FBI would have stopped the sale of the gun to Roof if it had more time to thoroughly check his record, which included arrests on drug charges that would have barred him from purchasing a firearm.

“The arbitrary deadline of 72 hours allowed him to purchase a gun he should have never been allowed to obtain,” Blumenthal said.

He also said the FBI says, in the past five years,  15,729 ineligible buyers were able to buy a gun because a background check had not been completed.

The vast majority of background checks are completed within minutes, the FBI says, but some complicated ones take longer, and those are often the ones that deserve the most scrutiny.

A lack of bipartisanship may doom the legislation in the Senate, where 60 votes are needed to overcome a filibuster but only 44 seats are held by Democrats. The bill’s sponsors say they are seeking Republican co-sponsors.

WalMart does not allow “default sales,” but other large retailer do.

Blumenthal and Murphy created a stir this summer by suggesting a boycott of Cabela’s, EZ Pawn and Bass Pro Shops, which they say are the three largest firearms dealers that currently allow default sales, if they continue their policy.

Blumenthal and Murphy – and 11 other Democratic senators — wrote Cabela’s, EZ Pawn and Bass Pro Shops on July 28, urging the retailers to wait for the FBI to finish its job.

“We are writing you with a simple ask: stop selling guns to people who do not first definitively pass a background check,” the senators said.

As of Wednesday, none of the retailers had responded to the senators’ letter.

A spate of recent killings – besides the shooting in South Carolina that killed 10 people – has revived efforts by gun safety advocates to change federal firearms law.

The focus is on extending background checks to sales made at gun shows and firearms purchased from individuals over the Internet.

About a dozen Senate Democrats, including Blumenthal and Murphy, unveiled a sweeping gun control push earlier this month that included the expansion of background checks and stiffer penalties for “straw purchases,” that is the purchasing of a gun for someone else who is barred by law from owning a firearm.

But legislation to implement those changes has not been introduced in the Senate. Sen. Charles Schumer, D-N.Y., said it might be introduced later this year or early next year.

Two background check bills have been introduced in the House of Representatives.