With eye on ’16, GOP hits Malloy in municipal races 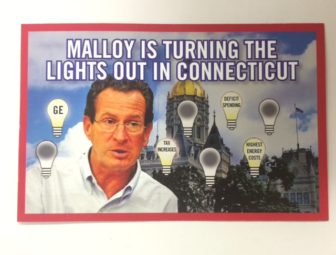 Gov. Dannel P. Malloy doesn’t appear on a ballot in 2015, but Republicans are making the unpopular Democrat an issue in municipal races, testing a message voters are likely to hear again in the fight for the General Assembly in 2016.

“We’re telling voters to send Dan Malloy a message and vote Republican,” said J.R. Romano, who took over in June as chairman of the Republican State Central Committee.

The effort is meant to reinforce what a recent Quinnipiac University poll found to be voters’ dim view of Malloy, the Democratic-controlled General Assembly and the state’s inability to achieve fiscal stability and robust economic growth.

Call it the soft opening of the 2016 campaign.

Next year, the GOP will try to convert that disapproval into a rare gain of legislative seats in a presidential election year, which tends to favor Democrats in Connecticut. To win a chamber, Republicans need to pick up four seats in the 36-member Senate or 12 in the 151-member House.

“I think people are in tune with the fact the state is going in the wrong direction on a number of levels,” said Senate Minority Leader Len Fasano, R-North Haven. “It has affected local communities and their inability to attract a business base, which results in higher property taxes.”

The next gubernatorial election is not until 2018, and the odds are long against Malloy’s seeking a third term, but Fasano said he believes Republicans can begin the 2016 legislative contest now, using municipal campaigns as referendums by proxy on the leadership of the governor and his party.

GE was a reference to General Electric’s threat to relocate its headquarters from Fairfield to another state as a protest over the state’s business climate and tax policies.

Malloy and GE are issues Republican are using in Fairfield against First Selectman Michael Tetreau, a Democrat.

“Unlike Mr. Tetreau, I would not be sitting back hoping that Mr. Malloy, with his historic tax increases and anti-business legislation clearly provoked GE to consider relocating, will somehow save the day alone,” Christopher Tymniak, his GOP challenger, said in a campaign statement.

“Dan Malloy’s policies are causing companies like GE to leave Connecticut, compromising the security and well-being of hundreds of Trumbull families,” Herbst says in narration over a photo illustration of Malloy and Tesoro.

Herbst, the GOP nominee for state treasurer in 2014, said the fate of GE’s headquarters and the state’s business climate in general are staples of his conversations with voters as he goes door-knocking. 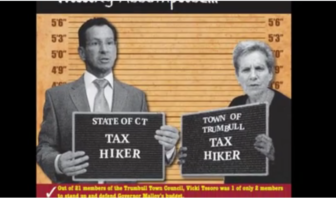 Malloy and Democratic first selectman challenger Vicki Tesoro are featured in a campaign video for Republican Tim Herbst in Trumbull.

“I have never heard state issues come up so much at the door when you are talking about a local race,” Herbst said. “I can tell you Gov. Malloy’s approval rating is even more toxic in Trumbull than it is in a statewide poll.”

Tetreau, the Democrat seeking re-election in Fairfield, said he is confident voters will judge him on his record, not the governor’s. He does not defend the budget.

“First of all, there is no question the budget and tax increase had a major impact on GE. That is frankly a direct problem the state caused for us. The budget passed was not a good budget for Fairfield. We’ve been fighting it every day since.”

Tetreau suggested that the Republicans, by running against Malloy and the legislature, can be portrayed as having nothing relevant to say about the quality of government in Fairfield. He noted that the town is one of the few with a triple-A bond rating and a fully funded pension and retiree health fund.

“I trust the residents of Fairfield to be very intelligent voters. They will make up their minds based on what’s important and what’s relevant,” he said.

House Speaker J. Brendan Sharkey, D-Hamden, was skeptical that Republicans can capitalize on state issues in the municipal elections. Republicans tried the same tactic in last year’s legislative elections, generating complaints that the GOP had illegally used publicly financed legislative campaigns to attack the governor, who was on the ballot in 2014.

“Local elections are primarily decided by local issues and candidates,” Sharkey said. “If it is true that state Republicans are basing their municipal campaign message on attacking state Democrats, it is not surprising. There are at least eight complaints that have been pending with SEEC for a year over this very issue of mixing campaign messaging.”

But Sharkey and other Democrats are hardly blasé on the dangers posed next year by voter anger over taxes and the state’s business climate. It is a prime factor in the ongoing talks with Malloy over whether to return in special session to stabilize the state’s finances. 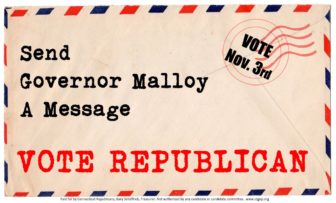 One of the postcards the state GOP is sending out.

Living on a tight budget, the GOP is directly involved in a relative handful of races. Romano said the party is targeting elections in 20 municipalities, which he declined to name.

From July 1 through the most recent reporting deadline of Oct. 15, the state GOP spent $52,070 through its state account, which can be used in municipal election years. In the same period, the state Democratic Party spent $77,757.

Leigh Appleby, the spokesman for the state Democratic Party, said the GOP is attempting a difficult task.

“These are local races, and they are going tbe determined by local issues and which candidate does the better job mobilizing voters and getting out the vote,” Appleby said. “That said, the governor and the lieutenant governor are certainly leaders of this party and are heavily vested in making sure we have successful elections this year.”

“I think that is not my concern at this stage of the game,” Simmons said. “I am concerned my town had a first selectman who acted very badly and placed my town on the front p[age of the Hartford Courant and New London Day with allegations of sexting and texting.”

Edward Haberek Jr., a Democrat, resigned in December after The Day reported he routinely used his official cell phone to sends thousands of personal texts, many of them sexual in nature, during the business day. In an editorial, The Courant called him, “Stonington’s First Sextman.”

Crouse served on the board with Haberek.

Simmons said if he is going to make Crouse answer for another Democrat, it will be Haberek, not Malloy.