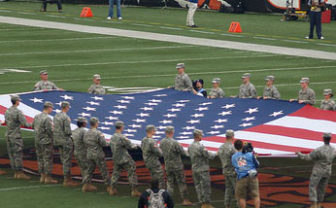 Washington – Tributes to U.S. troops at New England Patriot games and other professional sporting events are wasteful “paid patriotism,” costing taxpayers millions of dollars, say several U.S. senators, including Richard Blumenthal, who have pressured the Pentagon to stop the practice.

A recently released Senate report said that, since the end of 2011, the military has spent $6.8 million on sports marketing contracts that pay for tributes and other events, including the honoring of American soldiers as a recruitment strategy.

Blumenthal, in partnership with Sens. John McCain, R-Ariz., and Jeff Flake, R-Ariz., has been working for months to end the practice.

“Honoring our hometown heroes should definitely have been done, but without fattening the bottom line of our sports franchises,” Blumenthal said.

Blumenthal and McCain included a provision in the defense authorization bill the Senate is expected to approve this week that would bar the Pentagon from spending money on  tributes. Under pressure from the senators, the Pentagon has said it will end this type of marketing.

But McCain said he’s not convinced the Pentagon has disclosed all of its business dealings with sports teams and believes the cost to taxpayers may be much higher than reported.

“Over the course of the effort, we discovered the startling fact that the Defense Department cannot accurately account for how many contracts it has awarded or how much has been spent,” the Senate report said.

“Most fans had no idea they were viewing a paid marketing campaign,” Blumenthal said.

Most of the money for tributes went to NFL teams.

On Monday NFL Commissioner Roger Goodell released a letter to McCain and Flake that said the NFL is conducting an audit of all payments to professional football teams from all the military branches and the National Guard.

“If we find that inappropriate payments were made, they will be refunded in full,” Goodell wrote. “We will share the results of this review with you.”

Goodell also said the military had contracted with individual NFL teams to promote recruitment efforts, using multiple platforms to maximize the reach of their message, such as ads placed in game programs and on scoreboards or recruitment kiosks in our stadiums.”

Goodell said, “These efforts are intended to be separate and apart from the NFL’s longstanding recognition of the service members and their families who have dedicated their lives to serving this great country.”

The senators’ report said that wasn’t always the case, and that contracts with teams often included items the senators considered “paid patriotism,” including on-field tributes and perks for military personnel.

Major League Baseball, and professional basketball, hockey and basketball also participated in “paid patriotism,” the report said, with the Boston Red Sox receiving $100,000 over two years and the New York Mets $51,000 in one year.

The New York Football Giants and the New York Yankees were not included in the report.

“The Red Sox’ longstanding sponsorship agreement with the Massachusetts National Guard, which is highlighted in the report, is for marketing and advertising of the guard – specifically LED advertising and in-park tabling – not for pregame ceremonies or military honors during the game,” Curran said.

Other sports teams have also said the money they were paid for recruitment efforts were not linked to patriotic tributes, but often that line was blurred.

The money paid the New England Patriots went to recognize a Massachusetts Army National Guard soldier at each home game as part of a “true patriot” promotion.

The Patriots’ contracts with the Pentagon also gave the National Guard season tickets, training camp passes and access to hospitality suites during the game. The Senate report questioned whether these types of perks were used by service members participating in the on-field presentations or the recruiters working the events.

“We believe that whether such tickets were originally intended to be used, and were in fact used, for the personal benefit of DOD personnel warrants further investigation,” the report said.

Blumenthal said “some of the luxury seats were going to people who were not being honored.”

The Patriots did not respond to a request for comment.