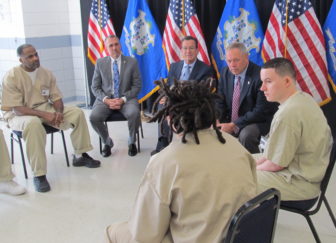 Somers — It was a short speech, not unlike others politicians give around Nov. 11. Gov. Dannel P. Malloy faced an audience of more than 100 men seated in a squared-away bunkroom, all wearing khaki uniforms.

He thanked them for their military service in the preservation of liberty. Malloy caught himself and said, “That sounds a little weird, talking about freedom in a facility like this.”

Some of the men nodded.

His audience was veterans of various branches of the U.S. military, all clad in the same light brown, baggy tops and bottoms, the uniform of prison inmates in Connecticut. For the past five weeks, they have been living in a new “reintegration” unit, a last stop before freedom.

It is the latest in what Correction Commissioner Scott Semple, with the governor’s strong support, intends as a series of reforms to reduce recidivism by segregating inmates approaching release in anywhere from a few months to a few years for intensive services.

“This is not about a revolution,” Malloy said. “It’s about an evolution. It’s coming to grips with the fact in America for too long, maybe 40 or 50 years, we became more interested in permanent punishment than we were in permanent reform. It’s time we changed that balance.”

Malloy, a Democrat re-elected last year, has made criminal-justice reform a second-term priority. He won bipartisan passage in the 2015 legislative session of a “Second Chance Society” initiative that streamlined parole and pardons and reduced penalties for non-violent drug crimes. He recently announced proposals to raise the age for referrals to the juvenile justice system from 17 to 20, with the potential of diversionary programs for defendants through age 24.

“What we’re about now is creating a system where we call upon those individuals who can turn their lives around to do just that,” Malloy said. Of the new veterans unit, he said, “Of this particular program, what we are attempting to do is to call upon some of the best days of these individuals’ lives.”

The first community reintegration unit opened in April in the same prison, now renamed and re-purposed as the Cybulski Community Reintegration Center. Semple hopes to open similar units at facilities for women and youthful offenders.

James P. Tatum, 51, of Stratford, an Air Force veteran, said as a short-timer facing release after the New Year he initially declined the chance to spend his last incarcerated months at Cybulski, where counselors and representatives of the Veterans Administration help inmates devise plans for finding jobs and housing after release.

“I said, ‘I’ll be short in October. I don’t want to take a bed.’ They told me I could benefit, even if only for a few months,” Tatum said.

Tatum, who says sporadic drug use has kept him in frequent contact with the criminal justice system, said the counseling and support services are comprehensive, and the atmosphere in the unit is no-nonsense. His latest return to prison was preceded by a relapse, a binge of drinking booze and smoking crack.

Semple said drug and alcohol abuse is a common thread through the veterans’ unit and the prison population as a whole. Addiction service is one of the core programs in the unit.

Malloy later would help dedicate a veterans memorial in a small park outside the Legislative Office Building and State Armory in Hartford, where he noted that Connecticut was the first state to be certified as ending chronic homelessness for veterans. In both events, he told the veterans, “Thank you.”

At Cybulski, Tatum was one of four inmates to sit with Malloy, Semple and Warden John Tarascio to talk about the reintegration program, a casual enough chat — if the inmates only could ignore the semi-circle of television photographers and reporters who leaned in to record the meeting.

To the governor’s left was the youngest of the four, 26-year-old Adam Lincoln of South Windsor, who enlisted in the Army at 18, served in Iraq during the military drawdown and was an Army Reservist until shortly before entering prison this year.

Lincoln said the reintegration unit was productive time with access to counselors, education and other services, all with a sense of mission.

“Think this calling upon better days is a way to do it?” Malloy asked.

“Yeah, I never lost my military bearing,” said Lincoln, who still wears his dark hair clipped high and tight. His experience, he said, will help “get me through this.”

“Hang in there,” Malloy said.

Malloy never asked what brought him to prison.

Lincoln was sentenced in March to 3½ years on a second-degree manslaughter conviction stemming from a drunk-driving accident that left one passenger dead and another injured.

Two others in the group were Army veterans from Bridgeport, Hiram McReynolds, 33, of Bridgeport, and 48-year-old Robert Smith. Tatum was the only one who served in the Air Force.

“What’d you do in the Air Force?” Malloy asked.

Nationally, about 10 percent of all state inmates were veterans in 2004, the last time the Bureau of Justice Statistics conducted a survey. That was down from 12 percent in 1997 and 20 percent in 1986.

Connecticut’s prison system had no idea of the size of its veteran population until early this year, when Semple says he had one of his “wood-chopping moments,” the thoughts that occur when he is doing chores at home.

He ordered staff to do a tally that found hundreds of inmates with military service, a discovery that led to the separate reintegration unit. The current veteran census is nearly 700, or about four percent of the total inmate population of 16,000.

Malloy told the inmates that Semple had gone to great lengths to create the program.

“Make me look good, will you? Make this successful.” Malloy said, nodding toward Semple, who sat to his immediate left. “Make us look good.”