Parsing what it meant to be ‘there’ at Sandy Hook 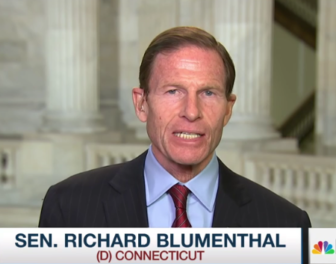 U.S. Sen. Richard Blumenthal, D-Conn., was not necessarily wrong when he told a television interviewer Monday night he “was there” when relatives of Sandy Hook shooting victims were informed of their deaths. But was he misleading?

Republican critics say Blumenthal left a misimpression during an appearance on MSNBC’s “Hardball” that he witnessed Gov. Dannel P. Malloy informing families waiting at a firehouse near the Sandy Hook Elementary School there were no additional survivors.

Blumenthal, whose mischaracterization of his Vietnam-era military service was an issue in 2010, was denouncing a Super PAC presidential ad praising U.S. Sen. Ted Cruz for stopping gun control efforts in Congress after the murders of 20 children and six educators at Sandy Hook.

“Why this ad is so offensive is it shows a basic lack of humanity. I was there when those families learned that their six beautiful children and,” Blumenthal said, quickly correcting himself, “20 children, and six great educators would not be coming home that night. And I was there when the president came to comfort them.”

Two things are not in dispute.

Blumenthal was not in the room on Dec. 14, 2012, when Malloy informed anxious parents and other relatives that every survivor had been identified and reunited with family; they could assume their loved ones were among the 26 dead at the school in Newtown.

But he did join other public officials who gathered that day at the firehouse. In previous remarks, including a speech to the Senate just four days after the attack, he described seeing distraught parents after their meeting with the governor.

“I will live forever with the sounds and sights of those parents – the cries and sobbing, cries of grief and anguish,” Blumenthal said on the Senate floor.

So, he was there, but was he there?

“To be clear, he was there. He was at the firehouse and outside the room when the governor met with those families. He saw the families as they left after learning the news,” Zembik said. “Everything about it is accurate. He was there.”

Chris Healy, who was Republican state chairman during Blumenthal’s first Senate campaign, pounced on the senator’s language, saying any viewer of the “Hardball” interview would wrongly believe that Blumenthal was placing himself inside the room.

Healy said Blumenthal was placing himself in the room so he could use the grief of the families for a political purpose, much as Blumenthal denounced Cruz’s allies for exploiting the shooting.

Blumenthal’s statement on “Hardball” should be viewed in the context of the controversy over his misstatements about Vietnam, Healy said. Blumenthal, whose official biography correctly described his stateside military service in the Marine Reserve, referred as recently as 2008 to serving in Vietnam.

“It speaks to his really sick soul,” Healy said.

Rich Hanley, a journalism professor at Quinnipiac University, offered no opinion on the health of the senator’s soul, but he did not hesitate to say Blumenthal failed as a communicator on “Hardball.”

Blumenthal’s ambiguity no doubt created an impression to the casual viewer that he personally witnessed Malloy’s meeting, Hanley said.

“They will interpret it as you think they would — he was in the room. Politicians ought to be more understanding of the way media works, the way the medium of television works. Leave no room for interpretation,” Hanley said. “English professors can argue over what ‘there’ means. Viewers will have one impression.”

Former State Sen. John P. McKinney of Fairfield, a Republican who represented Newtown and was among the first elected officials to arrive at the firehouse, said he, too, thought Blumenthal’s comments placed him in the room with Malloy.

He said he has a stronger recollection of being with Chris Murphy, who had recently been elected as a U.S. senator, as Malloy concluded it was wrong to make the families wait for a formal identification of the dead.

“The governor, faced with no good decision, no right decision, said, ‘It’s been too many hours. I need to tell them,’ ” McKinney said, describing Malloy’s entering a room where the parents had gathered. “I know I was standing next to Chris Murphy, right outside in the hall. The door was open.”