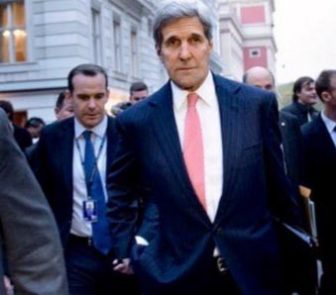 Brett McGurk, left, with Secretary of State John Kerry in Vienna during talks with stakeholders about the Syrian refugee crisis.

Washington — Former West Hartford resident Brett McGurk is considered a leading expert at the State Department on the threats posed by the Islamic State and what the Obama administration is trying to do about them.

But fighting international terrorism isn’t his only challenge. He’s been tasked with persuading skeptical lawmakers, including members of Connecticut’s congressional delegation, to back President Obama’s campaign against ISIS, also known as ISIL, in Syria.

Ryan Crocker, former ambassador to Iraq and Afghanistan, told Foreign Policy magazine it could be “a job from hell.”

A 1991 Conard High School graduate who received a bachelor’s degree from the University of Connecticut before obtaining a law degree from Columbia University, McGurk has had a long career at the State Department despite his relatively young age. That career has mostly positioned him in the midst of the U.S. conflicts in Iraq and Afghanistan. Now he’s turned his attention to fighting the Islamic State.

This week McGurk was sent to brief skeptical members of the Senate Foreign Relations Committee, including Sen. Chris Murphy, D-Conn., about Obama’s plans in Syria.

“There’s no doubt that we’re making military progress,” Murphy said. “But I didn’t get any good answers on what our new limitations are.”

There’s great concern in Congress about Obama’s recent announcement that he is deploying dozens of special operations forces to Syria to advise and assist a coalition of rebels. U.S. air strikes in Syria have intensified since the October 30 announcement.

“The president said there would be no ground troops; now there are ground troops,” Murphy said. “I just worry about the quagmire we would get into if we commit to more troops on the ground.”

Rep. John Larson, D-1st District, said, “As someone who opposed the Iraq War and remains skeptical of embroiling ourselves further in the Middle East, the recent introduction of U.S. military advisors in Syria is a serious cause for concerns about mission creep.”

“We continue, without obvious success or strategy, to fight on both sides of a messy, Middle Eastern civil war,” Himes said.

The president’s move to deploy U.S. special operations forces in Syria also has renewed calls by lawmakers, to move a bill through Congress called a new  Authorization for the Use of Military Force, or AUMF, that would set parameters on U.S. military involvement in Syria and elsewhere.

“The president’s decision to deploy a small special forces unit to assist in training in Syria underscores the need for congressional Republican leadership to finally respond to repeated requests for debate and approval of a new AUMF,” said Rep. Joe Courtney, D-2nd District.

Efforts to pass an AUMF stumbled earlier this year. Obama sent Congress suggested language on the AUMF in February, but Republican hawks argued that it was too restrictive, especially regarding ground combat operations. Liberal Democrats, including members of the Connecticut congressional delegation, were concerned it could lead to an open-ended ground presence in the Middle East once again.

Sen. Richard Blumenthal, D-Conn., said a vote on the AUMF “is not only desirable, but necessary,” both to define a strategy and to test where there is support from the American people for that strategy.

“We need to support a regional effort to fight ISIS. Military force form the United States alone is not a solution,” he said.

Other Connecticut lawmakers are also calling for an AUMF vote.

“Congress ought to fulfil its constitutional responsibility and debate a new Authorization for Use of Military Force (AUMF) that is limited in scope, time, and geography for our current actions in Syria and Iraq,” said Rep. Elizabeth Esty, D-5th District.

Esty and Himes have joined dozens of Democrats who have written Obama asking him seek a political solution to the civil war in Syria through diplomatic negotiations.

Convincing Congress the United States is on the right path in Syria may be a tough job for McGurk, but he’s been in a bad spot before. 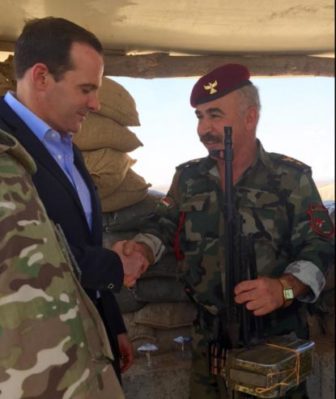 McGurk meeting with a Peshmerga fighter battling ISIL in Iraq near Gwer.

In 2012, he was forced to withdraw his nomination as U.S. ambassador to Iraq after e-mails were leaked that revealed he had been having an extramarital affair with Gina Chon, then a reporter for The Wall Street Journal.

But McGurk remained immersed in Middle Eastern policy. In August of 2013, he was appointed assistant secretary of state for Iraq and Iran in the State Department’s Bureau of Near Eastern Affairs.

From that position, McGurk was an early advocate for the need to combat ISIS.

He gave members of Congress an early education about the dangers posed by the radical Islamist group, which few lawmakers had ever heard of before.

“Flush with thousands of foreign fighters and suicide bombers, ISIL in Syria and Iraq increasingly represents a serious threat to U.S. interests,” he testified at a House Foreign Relations Committee last year. “ISIL’s leader, Abu Bakr al-Baghdadi, seeks to follow in the footsteps of Osama Bin Laden as the leader of a global jihad, but with further reach from his own terrorist state in the heart of the Middle East.”