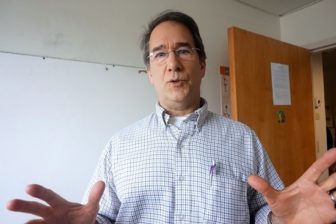 Aliyya Swaby :: The New Have Independent

New Haven — After Indiana’s governor refused to take in a family of Syrian refugees, New Haven’s Chris George immediately agreed to help. The family — the unwitting pawns in a national post-Paris ideological argument — has arrived in town.

Gov. Dannel P. Malloy met with the family upon its arrival in New Haven Wednesday. The governor held a press conference at New Haven City Hall after the meeting to make a larger point about an “overreaction” in the country to the terrorist attacks in Paris.

“Not every American and not every American governor is the same,” Malloy said he told the family, whom he described as “good people.” “… I assured them that not only was I welcoming them, but I was proud that they’ve come to the U.S. and come to Conecticut. I told them that people in the United States are generous and good people, but sometimes things happen elsewhere that cause people to forget about their generosity and forget about their native warmth and spirit.”

George, executive director of the resettlement agency Integrated Refugee and Immigrant Services (IRIS) on Nicoll Street in the East Rock neighborhood, said he didn’t hesitate before agreeing to accept the family of three.

IRIS had already been in the spotlight once Syrian refugees began to arrive at New Haven’s doors at the start of the war; it has settled 22 Syrian families so far. (Click here and here to read stories about that.) Now George and the organization are in the middle of a heated political debate about whether the U.S. has a duty to help people seeking security from terrorism and violence in their own countries.

The federal Department of State allocates refugees to nine organizations across the country, which distribute cases to about 30 or 40 small nonprofits—about 350 total, including IRIS.

The family — a father who used to run a used-clothing store, his wife, and their 5-year-old son — had waited three years in Jordan to come to the U.S. after being exiled from Homs, Syria. The family had intended to head to Indianapolis Wednesday. But Republican Gov. Mike Pence said he would not allow them, forcing the local Indianapolis resettlement agency to scramble to look for another placement.

Gov. Malloy, a Democrat, has taken a national stand in favor of continuing to accept Syrian refugees in the wake of the terrorist attacks in Paris. Governors and Congress members have called for a halt to allowing Syrian refugees in the country after it was learned that one of the Paris attackers had spent time in Syria.

Malloy compared the “hysteria” of Republican lawmakers to U.S. internment of Japanese-Americans in World War II. He also noted that attackers in Paris lived in France and Belgium. “No governor, no member of Congress, no leader of the Congress has said we should stop allowing people from France of Belgium from coming into the country,” Malloy noted.

“Of course we said yes,” Chris George said of the request to accept the Syrian family, recalling the chain of events in his office Wednesday morning. “We welcome all refugees regardless of religion, race, nationality.”

His split-second decision brought a flood of reporters and camera crews to the organization Wednesday — wanting to know more about why he said yes and whether they could speak to the family.

The family had not yet arrived Wednesday morning, George continued to say as he took calls from national and local outlets. IRIS staff had not yet talked with them and did not know if they would be willing to speak to anyone. 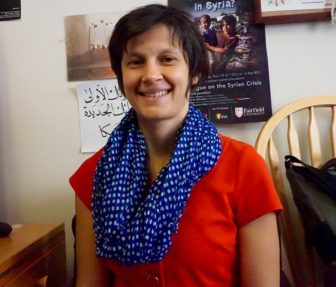 Ashley Maker, IRIS community liaison, said many refugees are worried about family members still in their home countries who might be endangered by their speaking to press. “We want to protect them,” she said.

Fewer than 2,000 Syrian refugees have been admitted into the U.S. since the start of the Syrian war. Panic increased once investigators found a Syrian passport at the site of one of the attacks, though it was not clear whether it belonged to an attacker, victim or someone else.

About 60 percent of all governors, most of them Republican, have said they won’t allow refugees to resettle in their states. President Barack Obama pushed back against those security concerns at a press conference early Wednesday.

Although legally, governors cannot bar refugees from settling in their states, they can ask the State Department not to send them refugees and withhold state funds for those who do arrive.

The U.S. government goes through an extensive vetting process over the course of several months before allowing refugees into the country — including background checks, face-to-face interviews, checks with intelligence agencies and biometric scans to securely establish identity.

“If at the end of that, there are still some questions, the refugee is not getting into the country,” George said.

If people understood how “robust” that screening process was, “they would not worry,” he said. “They are politicizing a program; they are posturing. Honestly they are un-American.”

This family is the fifth family IRIS is working to resettle this week, Maker said. Usually, the agency’s staff have “two weeks lead time” to find refugees permanent housing with a landlord and fully furnish it, allowing them a more fluid transition, she said.

But in this case, they found temporary housing for them and will work over the next two weeks to find permanent housing, Maker said.

Video of Gov. Malloy press conference after meeting with Syrian refugee family. (By Aliyya Swaby of the New Haven Independent)