State residents will probably have to pay at least $700 more in tuition to attend the University of Connecticut next school year — a 6.7 percent increase.

However, the total cost could rise even more because the proposed tuition hike the Board of Trustees is expected to adopt in two weeks does not include the mandatory fees students also must pay.

University leaders would not disclose whether they plan to raise fees, as they regularly have in previous years. Student fees are typically increased in the spring.

When considering tuition increases, Jordan said during the town hall meeting that UConn’s rates are competitive for state residents but among the most expensive for out-of-state students.

“We are a great value,” Jordan said of the proposed in-state rates. “We think we are being fair. We think what we are proposing is a relatively modest increase.”

Many of the students that attend UConn do not pay the listed tuition price because more than half receive scholarships. 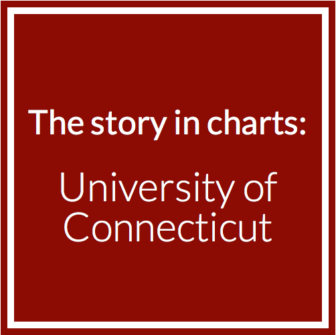 The university reports that it faces a $40.2 million dshortfall for the fiscal year that begins July 1, a 3 percent gap in what it says is needed to continue offering existing programs and services and to provide a pay raise for staff between 1 and 3 percent.

Jordan said the tuition increase will cover about one-third of the gap.

“It’s not enough,” he said. “We are not talking about raising tuition to fill the [entire] gap…We will still have a $27 million gap.”

And, he warned, the shortfall will swell if the state does not provide UConn with the increases adopted in the two-year state budget. University officials are expecting cuts because nonpartisan fiscal analysts are projecting a $552 million state budget deficit in the upcoming fiscal year.

As UConn’s costs have soared, state spending has not kept pace. While state spending for UConn has increased by $110 million since 2006, the share of the university’s budget state spending covers has dropped from 38 percent to 33 percent.

The cuts that UConn officials said Tuesday they are considering to close the remaining $27 million shortfall are worrisome to Charlie Smart, an honors student at UConn studying journalism.

“I am concerned,” the sophomore said.

Smart, who receives a $5,000 scholarship from the university each year, said he will probably have to take out loans next year for the first time.

“It’s affordable, and I understand why they need to make these kind of increases,” he said.

University officials said they have not yet determined where they will cut. The school’s budget is not adopted until late spring. 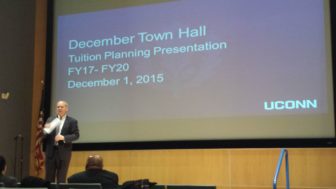 In a statement, UConn President Susan Herbst said the increase is necessary.

“The state has made extraordinary investments in the university over the last two decades,” she said. “Safeguarding that investment means protecting both UConn’s value and academic quality, which this proposal would do. Above all, we want UConn to be a university where our students can receive an exceptional education at a competitive value.”