Malloy steps into spotlight, and line of fire, at DGA 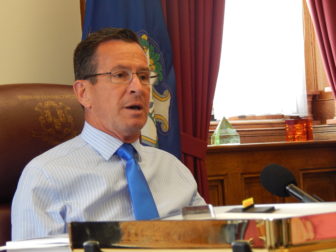 Intent on undermining his value as a DGA spokesman and fundraiser in 2016, the RGA was quick Monday to note Malloy’s low approval rating and the continuing financial and economic struggles of Connecticut.

“Malloy represents the worst of Democrat governors’ failed policies – raising taxes, increasing regulations, misleading voters and driving away business and jobs. As the DGA attempts to cling to its small minority of only 18 governorships in 2016, Gov. Malloy will be a major liability to Democrat gubernatorial candidates everywhere,” said Jon Thompson, the RGA spokesman.

The similar struggles of New Jersey, whose fiscal health ranks it 49th of the 50 states, did not seem to hobble Gov. Chris Christie as the RGA chairman in 2014, when his national travels took him five times to Connecticut to oppose Malloy’s re-election.

Elisabeth Pearson, the executive director of the DGA, praised Malloy as a strong campaigner who won tough races in 2010 and 2014 with pocketbook issues that appealed to the Democratic base.

“Gov. Malloy was the first governor in the nation to pass paid sick leave legislation, the first governor to raise the minimum wage to $10.10, and a leading voice on expanding voting rights and strengthening equal pay laws,” she said. “We’re proud to have him as the DGA’s leader.”

Malloy, 60, also has been a national advocate of gun control laws, a role he assumed three years ago after the massacre of 26 students and staff at Sandy Hook Elementary School in Newtown.

Despite Connecticut’s status as a blue state where Democrats control the General Assembly and all congressional seats, Malloy was the first Democrat to be elected governor since William A. O’Neill won his final term in 1986.

The election maps favor the GOP next year: Only three of the eight Democratic governors with expiring terms are seeking re-election, while three of the four Republican incumbents up for re-election are running again.

The five states with open Democratic seats in 2016 are Vermont, New Hampshire, Delaware, Missouri, and West Virginia. North Dakota, which is generally rated as a likely win for the GOP, is the only state with an open Republican seat.

One of the Republicans seeking re-election already is a favorite target, Mike Pence of Indiana. Malloy has clashed with him over Pence’s opposition to gay marriage and the resettlement of a Syrian refugee family turned away from Indiana and welcomed by Connecticut.

The DGA and RGA are major sources of independent expenditures, underwriting multi-million-dollar advertising campaigns in competitive races. In 2014, the DGA and RGA topped the list of outside groups that spent about $18 million on the Connecticut race for governor.