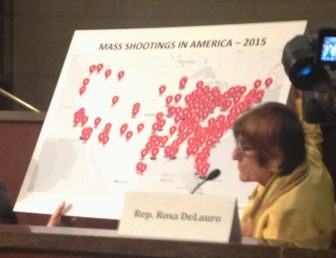 U.S. Rep. Rosa DeLauro with a map showing the sites of shootings this year.

Washington —  Democrats in Congress, including those from Connecticut, ratcheted up the pressure on Republicans Wednesday to take up gun safety measures.

The Democrats spent the day calling for gun control measures in the wake of  President Obama’s call on Sunday for a bill that would prohibit individuals on a terrorist watch list form purchasing a weapon.

An attempt to pass legislation that would do so failed last week in the Senate, but Democrats are not giving up, hoping the massacre in San Bernadino and increased concerns about domestic terrorists will turn public opinion in their direction.

California Rep. Mike Thompson, the chairman of the House Democrats’ gun violence task force, is trying to force House Republican leaders to bring up a bill that would ban gun sales to those on the no-fly list. Thompson is circulating a “discharge petition” that would force a vote on the bill if it receives a majority of  House votes.

Saying he wanted to “create a little mischief,” Thompson on Wednesday forced the House to hold several votes on whether it would adjourn, disrupting the GOP agenda for the day.

He derided Congress’ response after mass shootings like the ones in San Bernadino and Sandy Hook.

“We have a moment of silence, give them our thoughts and prayers, and go back to business as usual,” he said.

Rep. Elizabeth Esty, D-5th District, vice chair of the gun violence task force that held the hearing, said, “As we approach the third anniversary in Newtown, Connecticut, in my district, it is particularly shocking and  disappointing that this body, the House of Representatives, which is supposed to protect and support the American people, has not taken action.”

She asked a witnesses to identify the most important thing Congress could do to increase gun safety.

Daniel Webster, director of the Johns Hopkins Center for Gun Policy and Research, said expanding FBI background checks to guns sales by individuals at gun shows and on the Internet would have the most impact.

Another witness, Chris Kitseff, a gun show dealer from Arizona said it is “disheartening” to witness a potential customer fail a background check in the booth of a dealer and then walk over to an individual seller who is not required to check the FBI database before making a sale.

An attempt in the Senate to expand background checks failed in the Senate a few months after the Dec. 14, 2012 slaying of 20 children and six adults at Sandy Hook Elementary School.

Since action in Congress is stymied, President Obama said he wants to use his executive authority to expand those background checks. Some hope he will do so before the Dec. 14 anniversary.

Rep. Rosa DeLauro, D-3rd District, held up a map of the United States spattered with red dots, each marking the place of a mass shooting, which gun control advocates often define as the shooting of four or more people.

She asked witnesses about the impact of a nearly two-decade-old ban on the use of federal funds to study health-related impacts of guns.

He also said, “We need to know more about the path that guns take,” and about the connections between the legal gun market and the underground, illegal sales of gun.

Meanwhile, Sens. Richard Blumenthal and Chris Murphy took to the Senate floor Wednesday to urge their colleagues to back legislation that would bar people on the “no-fly” list from purchasing a gun.

“I am hard-pressed to think of a more clear and staggering example of the gun lobby’s influence than the defeat of this bill,” Blumenthal said. “The vote last week showed that the gun lobby has a staggering stranglehold on this process.”

Murphy also urged passage of the “no fly, no gun” bill, especially since the shooting in San Bernadino indicated home-grown terrorists are a growing threat.

“Importantly, this bill has a provision to be able to get off that list, to be able to say you were put on it mistakenly,” Murphy said. “But the vast majority, 95 percent, of the people on the terrorist watch list are there for a reason.”

But Republicans say the threat the bill poses to civil liberties is too great.

Cornyn is the sponsor of a rival bill that would require the U.S. government to go to court to bar anyone on the watch list from buying a gun.