GOP tries to force a labor reform that eluded Malloy 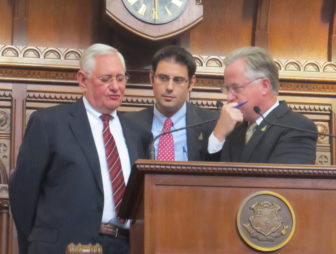 Malloy wanted the legislature to change its rules so that no labor contract or arbitration award could take effect without a vote of the General Assembly. In other words, every labor deal would be an element of legislators’ voting record.

The legislature’s Republican minority tried and failed in special session Tuesday to make the rules change sought four years ago by the Democratic governor, saying it would provide a greater check on the state’s labor costs.

Sharkey, a Democrat of Hamden, quickly ruled that the effort was beyond the narrow scope of the special session and therefore out of order. A GOP appeal of his ruling failed on a party-line vote.

But, as the political director of a major public employees union later conceded, the proposal was only the start of what is expected to be an effort in Hartford to provide greater legislative oversight of labor agreements.

“They are framing the issue for a debate to come,” said Paul Filson of the Service Employees International Union, which sees the proposed voting requiring as part of a campaign to erode wages and benefits.

A dozen unions have contracts that expire in June. Based on past history, they are likely to be resolved by arbitration, which will produce an award that can be ratified by legislators, rejected or allowed to take effect without legislative action.

Ben Barnes, who oversees budgeting and labor relations as the administration’s secretary of the Office of Policy and Management, said the administration thought it good public policy in 2011 to require a legislative vote on all contracts and arbitration awards.

“There’s no question that state employees lobby the legislature. They send people here. They have lobbyists in the halls. They are a presence in government and ask for what they want. And they have every right to do that,” Barnes said.

“You can believe in collective bargaining and still sit across the table from your employees,” Barnes said. “I think we wanted to bring the legislature onto that side of the table as firmly as possible.”

But the administration, which prevailed on taxes and other major initiatives, quickly realized that the legislature saw the rules change as an intolerable executive imposition on the inner workings of the General Assembly.

“Whether it’s the governor suggesting legislation that impacts the prerogatives of the legislature or the alternative, when they propose legislation that impacts our prerogatives, those are extraordinarily difficult,” Barnes said. “Those are the things that you often end up realizing you’ve got to walk away from, just because, you know, how are you going to get them to pass a bill that limits their authority any more than they’re going to get us to sign a bill that limits our authority.”

So, the administration walked away from a proposal it first printed in its 2011 budget recommendations.

“We’re being choked with costs,” she said. “We have to get a hold of those costs in some way.”

The legislature has not rejected a labor contract since 1995.

“If folks want input on collective bargaining agreements, they can go talk to the governor’s staff that’s negotiating,” Aresimowicz said. “That’s the way to go about it.