A science classroom in a New Haven high school

Teachers’ unions, school boards and education reformers are gearing up for a fight over whether to retreat from grading teachers on how their students do on standardized tests. But before the decision is made, Connecticut’s education chief wants a review of whether using test scores actually helps improve education.

“It’s an important question,” Education Commissioner Dianne R. Wentzell said Wednesday during an interview. “Sometimes people do an exercise like a ‘keep, delete, change’ exercise. I think we are at a point that we should do that, but we should do that with informed data, not just sort of how we feel about different parts of it.”

When state legislators and educators on a state panel that oversees evaluations were debating in 2012 whether to include test scores as part of a teacher’s annual rating, Gov. Dannel P. Malloy regularly pointed out that doing so was mandatory if the state wanted relief from the federal requirements of the No Child Left Behind Act.

That federal mandate ends August 1. President Barack Obama signed into law today legislation overwhelmingly approved by Congress that forbids the federal government to dictate a broad spectrum of state educational policies, including what must be included in teacher evaluations.

Leaders of the state’s largest teachers union have pounced at the opening and are already calling for decoupling evaluations from statewide achievement tests, and they plan to put forward an alternative approach to evaluations to the commissioner and state legislators by January.

“This is a tremendous opportunity, I think, to refocus,” Mark Waxenberg, the executive director of the state’s largest teachers’ union, the Connecticut Education Association, said Wednesday to the Performance Evaluation Advisory Council, which oversees the state’s teacher and principal evaluation system. “We are not talking about a total rewrite, but a different mentality.”

Several members of the panel were adament in 2012 that test scores play a vital role in measuring teachers’ progress because it is an objective measure. Those members included superintendents and school board leaders.

This week, the groups that represent superintendents, school boards, businesses, principals and education reformers wrote an opinion piece for The Mirror explaining what the state should do going forward.

“We must continue to provide performance evaluations and support for teachers and principals based, in part, on student achievement growth,” they wrote.

Members on the panel seemed open Wednesday to considering tweaks, but debate about whether such a change would include scratching test scores from the equation was saved for another day. The group plans to meet again in January.

“We are going back into a phase where we are going to be thinking about whether we are going to want to make refinements about how we do this in Connecticut,” Wentzell told the panel, which includes leaders of organizations representing school boards, superintendents and teachers. 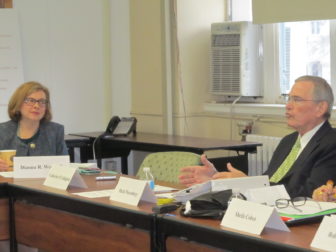 “That [law] gives us a lot of authorship over what we take stock of, of what’s gone well. What do we feel proud of over the last three years? What’s proved to be difficult. What’s proved not necessarily to impact kids in the way that we hoped that it would, or impact the adults that work with our kids? Where do we want to look for some refinements?” said Wentzell, a former, teacher. “It’s time to take stock.”

An assessment of the state’s evaluation system has not been completed since its pilot year, when researchers at the University of Connecticut reported that more than half the teachers they surveyed found their evaluation provided them no added value. Only 1 percent of the teachers evaluated were found to be “below standard,” the worst rating.

Since then, it has been impossible for the public or media to get an overview of evaluation results.

The State Department of Education has regularly denied The Connecticut Mirror’s requests to see the aggregate performance data it collects on individual districts and schools. Requests for aggregate state-level data also have been denied.

“It’s an unsettled legal matter,” Wentzell said during an interview Wednesday in explaining why her department will not release any performance data.

State law is vague about whether it applies to releasing statistical data about evaluations, or just evaluations of individual teachers.

“Any records maintained or kept on file by the Department of Education or any local or regional board of education that are records of teacher performance and evaluation shall not be deemed to be public record,” the law reads.

Different districts have interpreted this differently.

Mark J. Sommaruga, an attorney whose firm represents many local boards of education across the state, advises his clients that the evaluation data is not public.

The state’s Freedom of Information Commission will decide by July whether New Milford Public Schools illegally withheld aggregate-level records from a member of the local school board who sought them. Commission decisions can be appealed in court, however.

“We are holding off on publicly releasing any data until we hear from the FOIA Commission on this matter,” education department spokesman Abbe Smith said Wednesday.

The education department last spring sent superintendents guidance on data collection and sharing that recognized “that even aggregate data, especially when collected at the school level, could become identifiable.”

Wentzell said Tuesday the department has not yet determined how it plans to move forward with evaluating the evaluations system.

Such an assessment will prove challenging considering nearly every district began testing students with a new state exam two school years ago. To ensure those test results were valid in those inaugural years, the state delayed holding teachers accountable for how their students performed.

Malloy, a Democrat who took office in 2011, has not yet said whether the state should move away from linking test results to teacher evaluations.