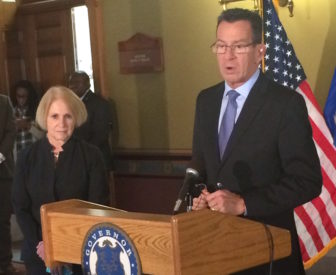 Nearly a week after Gov. Dannel P. Malloy announced his intention to use terrorist watch lists to screen gun buyers, it remains unclear how his executive powers would allow him to unilaterally alter criteria set by state law.

The office of Attorney General George Jepsen said Tuesday that no one has asked for a formal or informal opinion about whether Malloy could change the background checks by issuing an executive order.

Malloy, his general counsel and his communication staff have not provided a detailed rationale of the legal basis for his proposal, while repeatedly asserting the governor has the authority, once federal officials sign off on using the data.

“We have the legal ability to do it. When we sign that executive order, it will be done,” Malloy said.

“Coupled with federal approval, we know we have the ability under existing state law to direct DESPP to deny permits to those seeking firearms,” said Devon Puglia, his communication director.

DESPP is a reference to the state Department of Emergency Services and Public Protection, which includes the State Police.

New Jersey has used the watch lists to screen gun buyers since the passage of a state law in 2013.

The chief spokesman for the New Jersey State Police says his department’s firearms unit is able to run names against the watch lists through NICs, the National Instant Criminal Background Check system created by the FBI in 1998.

Connecticut uses NICs for background checks for the only two types of permits – carry permits and certificates of eligibility – that allow residents to purchase firearms, each with criteria set in state law.

“Listen, we believe we have the legal authority, and I’m waiting to see…how many people line up to say that we should sell guns to people who are on terrorism watch lists,” he said.

Gun owners say the watch lists are rife with errors: The late U.S. Sen. Ted Kennedy was reported to be on the list, as was John Lewis, the Georgia congressman and civil rights leader.

Malloy faces different questions about his ability to unilaterally change criteria for issuing either type of Connecticut’s gun permits.

Carry permits can be issued by the State Police or the chief of police in a community where the applicant has a home or business.

The law is clear when the permit must be denied, including a criminal record for a felony or certain misdemeanors and a history of mental illness. But police have broad discretion based on an undefined standard of suitability on when to grant a carry permit.

Their decisions to deny a carry permit for reasons of unsuitability are frequently challenged in appeals to an administrative review board.

Malloy might be able to direct the State Police to use an applicant’s presence on a watch list as evidence of unsuitability, but he has not explained how an executive order could restrict a local police chief.

The State Police are the sole issuing authority for certificates of eligibility, which allow the holder to purchase a firearm and possess it in their home or place of business. It does not allow a person to carry a firearm.

While the State Police are under Malloy’s authority, state law says police “shall” issue a certificate of eligibility, unless an applicant fails to meet specific criteria listed in state law, such as a criminal background, mental health history or being subject to a restraining order.

There is no discretionary standard of suitability.

How can Malloy unilaterally change the criteria set by the General Assembly?

Malloy says only that he has sought legal advice – from whom, he won’t say.

“We wouldn’t be saying these things if we hadn’t done that and if we didn’t believe we could,” Malloy told reporters. “And we believe we have the power to do it. And when we do it, you’ll all get a copy of it. You can all run around and get your own opinions, but we’re confident.”

In the meantime, the attorney general’s office declined a request by The Mirror to comment on how Malloy might change the criteria without legislation.

“Because there is no executive order in existence at this time to review and, should an executive order be issued, we anticipate we may receive a request for a legal opinion, it would be inappropriate for us to comment further at this time,” said Jaclyn Falkowski, a spokeswoman for Jepsen.