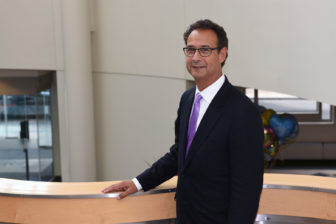 Dr. John F. Rodis has been named president at St. Francis Hospital and Medical Center in Hartford. An ob-gyn who recently earned a master of business administration degree, Rodis will be the first physician to lead the 118-year-old hospital.

He will succeed Christopher Dadlez, who has led St. Francis for 11 years and now runs the hospital’s parent company, Trinity Health – New England, which also includes Johnson Memorial Hospital in Stafford Springs, Mount Sinai Rehabilitation Hospital in Hartford, and Sisters of Providence Health System in Springfield, Mass. If regulators approve, it could also soon include St. Mary’s Hospital in Waterbury.

Rodis most recently served as executive vice president and chief operating officer at St. Francis. He joined the hospital in 2011 as chair of ob-gyn, and serves as a professor of obstetrics and gynecology at both the UConn School of Medicine at the Frank H. Netter, M.D., School of Medicine at Quinnipiac University. Before coming to St. Francis, Rodis led the ob-gyn department at Stamford Hospital and served as the hospital’s chief medical officer.

Rodis will become president on Jan. 1. An announcement by the hospital about his new post noted that Rodis’ background includes authoring more than 100 peer-reviewed academic papers, treating women through difficulty pregnancies and, growing up as the son of Greek immigrants in Brooklyn, spending summers and Christmas vacations working in a diner, “doing every job from busboy to dishwasher to short-order cook.” In a statement, Rodis added that doing so taught him “that every role in a business is vitally important to its success.”

An earlier version of this story incorrectly stated Rodis’ new title. He will be president, not president and CEO.