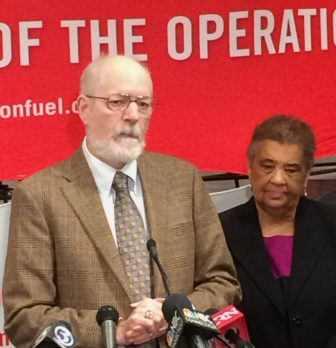 Falling fuel prices weren’t enough to prevent the number of Connecticut households in need of energy assistance from growing in 2015, according to a new report released Wednesday.

Operation Fuel, a nonprofit energy assistance program, reported that more than 313,000 households in the state can’t afford to cover their energy bills as winter nears.

“People are finally getting a break in energy prices, but the problem hasn’t gone away,” said Patricia Wrice, Operation Fuel’s executive director. “The number of households that can’t afford energy continues to increase. Oil, gas and electricity still are unaffordable for families and individuals who are struggling to meet their basic needs.”

The study measures the ability of Connecticut households with incomes below 200 percent of the federal poverty level to pay heating and other energy bills.

Despite major reductions in cost for both natural gas and fuel oil over the past year, about 313,000 Connecticut households will face a total of $471 million in energy charges beyond their ability to pay. According to economist Roger Colton, who prepared the study, that doesn’t reflect the total bill these households face, but rather the difference between the total bill and their available resources for energy costs.

On a positive note, the energy gap itself is down from 2014, when the aggregate excess cost was $784 million shared by 305,000 households.

But while the overall gap has dropped, a rise in low-income households means more families are struggling, Colton said, adding this usually means people must choose between paying energy bills and securing other necessities.

Another dangerous trend on the rise, he added, are Connecticut households in “deep poverty” struggling with energy bills. These households, with earnings less than 50 percent of the federal poverty level, face energy bills equal to almost 40 percent of their total income.

“These households are in deep, deep crisis,” he said, adding more poor families in Connecticut are now struggling to cover their water utility bills as well.

“The good news is far outweighed by the bad news,” Colton said. “The future is looking even bleaker in Connecticut.”

Rosenthal said new research into “energy insecure” households — which are frequently at risk of having utilities turned off because of bill delinquency — shows they have children with above average rates of hospitalization, upper respiratory infections, psychological distress and overall poor health ratings.