A governor’s visit to a smokehouse that offers second chances 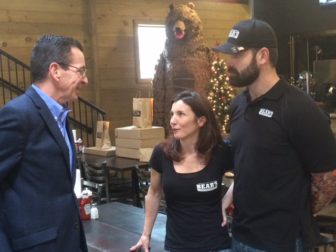 On the day before Christmas, Gov. Dannel P. Malloy ate well while promoting a husband and wife who do good.

Malloy dropped in on Bear’s Smokehouse, a Kansas City barbecue joint that landed a block from Hartford City Hall in the summer of 2014, for a low-key photo opportunity to promote his Second Chance initiatives and to thank the owners, Cheryl and Jamie “Bear” McDonald, for hiring ex-offenders.

“We would all be better … if more people did what these folks are doing, that is to give somebody a second chance,” Malloy said.

The couple did not set out to hire ex-offenders when they opened their first shop in Windsor.

“We just don’t hold it against them,” said Jamie McDonald, a bearded Navy veteran and Kansas City, Mo., native with the athletic build of an NFL linebacker, despite a sideline as a competitive eater.

One hire from an adult education program led to another and, eventually, a relationship with a halfway house that turned into a source of reliable help. At any given time, between one quarter and one half of their 80 employees are folks getting back into workforce after a stint in prison.

“It’s worked. It’s worked for us,” said Cheryl McDonald, who quit a job with the Hartford schools to help run an expanding business. “It kind of happened.”

It’s now part of the business plan, and it was an element of the successful pitch Jamie made for financing in a national competition sponsored by Go Daddy, the web-hosting company. He delivered the pitch to the company’s TV spokeswoman, race-car driver Danica Patrick, as she sped them around a track. You can see it on YouTube.

“We have people in our own families with various backgrounds, I’ll just say, or people that we know,” Jamie said Thursday. “You make a mistake. If nobody is going to take a chance on you, then that cycle is going to keep repeating. You’re going to go back to that same routine, and it’s one of the nice things about owning a business.”

Malloy is one of several governors from across the political spectrum who have taken steps to end what critics have called the era of “hyper-incarceration,” a consequence of mandatory sentencing and other get-tough-on-crime policies that have given the U.S. the highest rate of incarceration in the world.

“We’re trying to redesign a corrections systems, a criminal justice system, a juvenile justice system that is all about making sure that people cane come of their involvement with government better for it, not worse for it,” he said.

Correction Commissioner Scott Semple already has converted one prison to a community reintegration center to prepare inmate for release with plans for housing and employment. At Malloy’s urging, the General Assembly last year repealed mandatory minimum sentences for drug possession. 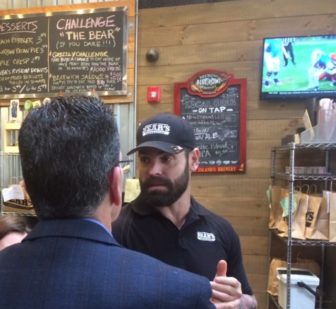 Jamie McDonald and the governor. Customers can challenge McDonald, a professional competitive eater.

Malloy said one of his goals is to end the permanent punishment that comes with a conviction – a record that can make student loans, employment and housing difficult to get.

“If they got a job, they are far less likely to go back to jail and they’re pulling down a salary, and they’re paying taxes,” Malloy said. “There but the grace of God go all of us.”

The McDonalds started with a small smokehouse in Windsor, then opened their Hartford restaurant at the end of Arch Street, near the Connecticut Convention Center, a movie theater and the Infinity music hall.

They are moving into a larger space around the corner on Front Street. The current location will be used for catering and events.

Their bill of fare got a rave review a year ago in the New York Times. Malloy concurred.

“I used to travel out of town to get barbecue, now we can get it here,” he said. “My wife and my son, Sam, have been frequent attendees here.”

On Thursday, Malloy had the brisket sandwich.