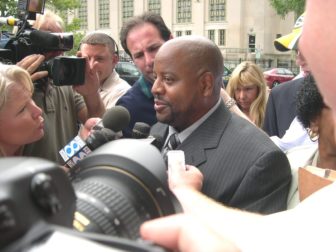 James Tillman surrounded by media after his release.

Washington – On a bitterly cold night in January of 1988, a 26-year-old woman was warming up her car in a Hartford parking lot when an assailant pushed his way into the vehicle, drove to a secluded spot, and beat, robbed and raped her.

East Hartford resident James Tillman was convicted of the crime, received a 25-year sentence and was jailed for almost 18 years before a DNA test  freed him in 2006.

Last week  Congress added to the restitution Tillman, and hundreds of wrongfully convicted people, received for the wrong the judicial system did them.

The act instructs the Internal Revenue Service that the awards from states and civil suits won by the wrongfully convicted should not be taxed.

“We took their time away; we should not take their money also,” said Rep. John Larson, D-1st District. “It’s a double whammy.”

Connecticut’s General Assembly voted the year after Tillman’s release to give him $5 million in compensation for his years of wrongful imprisonment. Former Gov. Jodi Rell had proposed $500,000 in compensation for Tillman, but legislators rejected it as insufficient.

Tillman’s award, and the awards and damages won in civil suits by other wrongfully accused people, are subject to federal taxes – unless exonerees argue their awards were for physical injuries.

The IRS does not tax awards arising from car wrecks or other accidents, inside or outside of prison. Now you no longer have to prove that you were physically injured in prison to get tax-free benefits.

After reading about Tillman’s case in the newspapers, Larson introduced the Wrongful Convictions Tax Relief Act in 2008.

“Because of the injustice of it, it became an interest of mine immediately,” Larson said.

But Congress was slow to act.

Regardless, Larson continued to introduce the bill in each Congress, the last time with the help of Rep. Sam Johnson, R-Texas. Sen. Charles Schumer, D-N.Y., and John Cornyn, R-Texas, were the Senate co-sponsors of the legislation.

A push to make some tax breaks permanent, especially a research and development tax credit, became a vehicle to finally win congressional approval.

The bill not only makes future awards tax free, it allows exonerees to file with the IRS for the return of any taxes paid on restitution money.

There is no reach-back cutoff date for this provision, but those wrongfully convicted who have paid federal taxes must file for refunds with the IRS no later than one year after the law’s enactment.

Brown said the median compensation from a state to a wrongfully convicted person is $339,250 and only 30 states, including Connecticut, give monetary awards of this kind. She also said some states give very limited awards. In New Hampshire, for instance, awards are capped at $20,000.

Former prisoners receive much more if they win a civil suit against the state – $3.6 million on average.

Since the first DNA exoneration in 1989, wrongfully convicted persons in 35 states served more than 3,809 years in prison before being freed, says a joint press release from Johnson and Larson.

The lawmakers say DNA exonerees have served an average of 13.5 years in prison, ranging from less than one to 35 years.

Brown said the Innocence Project has determined that since the late 1980s 336 prisoners have been proven innocent through DNA testing and released from jail.

In Connecticut, three prisoners besides Tillman have been freed through DNA testing, Brown said.

The University of Michigan law school, however, has identified 1,721 wrongfully convicted individuals who have been released through DNA testing and other methods, including proving a prisoner had poor legal representation or gave a false confession under duress.

Tillman was cleared through the efforts of the Connecticut Innocence Project, whose attorneys Karen Goodrow and Brian Carlow pressed for advanced DNA testing of the victim’s clothes.

He said Tillman, who could not be reached for this story, tried unsuccessfully to contact him after the wrongful convictions bill was approved.

“But we hope to get together after the first of the year,” Larson said.