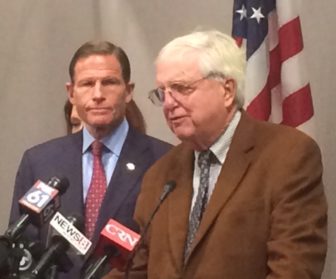 Moorhead Kennedy, a career foreign service officer, arrived at the U.S. Embassy in Tehran in September 1979 for what he recalled Monday as a temporary assignment assessing the economic impact of the ongoing Iranian revolution.

“I was very interested in seeing a revolution in progress,” said Kennedy, who quickly completed his assessment. “It was a very fruitful time until, all of a sudden, I heard a shout from the Marines, ‘They’re coming over the wall!’ And then a whole new experience began.”

That experience lasted 444 days as one of 53 embassy personnel taken hostage on Nov. 4, 1979, an ordeal that would bring them beatings and even more damaging mental abuse, including periodic mock executions depicted in the early scenes of the Hollywood movie, “Argo.”

On Monday, Kennedy met with reporters in Hartford to publicize a long-awaited epilogue: a resolution U.S. Sen. Richard Blumenthal helped promote that will pay $10,000 in damages for every day spent in captivity. That comes to $4.4 million for each former hostage.

“This cause is really a matter of very simple humanitarian justice,” Blumenthal said.

But there was nothing simple about it. Under the accord that led to their release nearly 36 years ago, the hostages were barred from suing Iran. Decades of political and legal battles followed.

Blumenthal, who was a young U.S. attorney in Connecticut during the takeover, which all but guaranteed the defeat of a politically weakened President Carter in 1980, joined U.S. Sen. Johnny Isakson, R-Georgia, in a bipartisan effort to get compensation. Three of the surviving 37 hostages are from Georgia.

Major elements of their proposal were included in the omnibus spending bill adopted last month. It will pay the hostages and other victims of state-sponsored terrorism from a fund principally created from penalties on companies who violated U.S. sanctions by conducting business with Iran or other barred countries, such as North Korea.

“My hope is this money will be forthcoming as soon as possible. Moorhead Kennedy is a patriot. He is a great public servant,” Blumenthal said. “This financial recognition is the least America can do to recognize his great sacrifice for the nation and the unspeakable terror and horror he endured.”

Kennedy, 85, lives year round on Mount Desert Island, Maine. One of his four sons, Philip Kennedy, lives in Madison and is a constituent of Blumenthal’s.

The elder Kennedy, a graduate of Princeton and Harvard Law School, where he was an early student of Islamic Law, described his ordeal matter of factly, as though delivering an after-dinner talk to alumni.

One night, he was awakened and told he was being moved. He was instructed to take none of his books, not even a toothbrush.

”A cellmate said to me, ‘I don’t like any part of it.’ I agreed with him,” Kennedy said. “We sort of knew at that moment we were being led out to execution.”

They were placed in a van, handcuffed, with blankets over their heads.

Others faced mock firing squads, such as those depicted in “Argo.”

They were released the moment Carter’s term as president ended. Kennedy retired to Mount Desert Island, where his family had a summer home.

“I came home waking up at night screaming,” he said. “One of my colleagues has literally not slept a full night, or hardly at all, for 36 years because of what was done to him. Others, families have broken up, people don’t know where they are.”

After 18 months back in the U.S., Kennedy said he showed strong symptoms of what would be diagnosed as Post Traumatic Stress Disorder.

“I suddenly stopped making sense. I was blithering away,” he said.

The families also suffered, he said.

“It has been a long road. I still remember the 24/7 horror show,” said Philip, his son. “This was unrelenting media coverage of a group of people you had absolutely no idea day to day what they were going to do, what kind of control was over there, what kind of decision-making. All we had were visions of hordes of angry men. You never knew whether your father was going to be dragged through the streets.”

About three dozen hostages are known to still be alive.