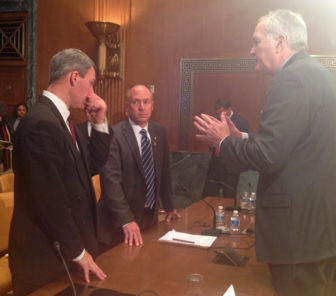 Washington – Mark Barden ,who lost his 7-year-old son Daniel in the massacre at Sandy Hook Elementary School, was outnumbered but undaunted Wednesday at a Senate hearing on President Obama’s recent moves to tighten gun laws.

Barden is a founder of Sandy Hook Promise, a group formed after the Newtown school shootings claimed the lives of 20 first-graders and six staff members on Dec. 14, 2013.

No stranger to the rough and tumble of the debate over gun control on Capitol Hill, Barden said “shamefully, Congress has done nothing” to address what he calls an epidemic of gun violence.

But most of the other witnesses at the Appropriations subcommittee hearing,  invited to testify by the panel’s Republican majority, said the president has made an illegal power grab.

“The centerpiece of the president’s order – expanding background checks to close what some call the gun-show loophole – is not only an unwarranted assault on the Second Amendment, but it will also be ineffective in making a significant contribution toward reducing overall gun crimes,” said Alabama Attorney General Luther Strange.

Barden introduced the president when Obama made a Jan. 5 speech announcing he would use his executive authority to attempt to broaden FBI background checks of prospective gun buyers by broadening the definition of those who are “engaged in the business” of selling guns to dealers at guns shows and individuals who regularly sell guns over the Internet.

Obama also issued new regulations on who must give notice when gun shipments are lost, and he changed privacy laws to allow mental health professionals to report potentially dangerous patients for inclusion in the computerized National Instant Criminal Background Check System

But former Virginia Attorney General Ken Cuccinelli said the presidents’s actions “appear to be in some cases merely aspirational and in other cases intentionally intimidating and harassing of law-abiding citizens in an effort to shy away from selling guns they legally own.”

Cuccinelli and his partners formed the United Self Defense Law Firm that specializes in defending those who used their guns in what they said were acts of self-defense.

The hearing was held by a Senate Appropriations subcommittee that approves the Justice Department’s budget. It’s chairman,  Sen. Richard Shelby, R-Ala., has 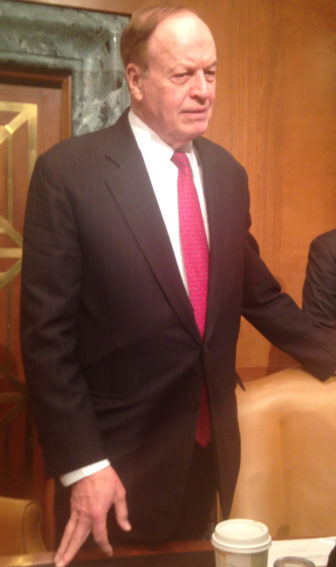 Shelby: “Chipping away at our Constitutional rights…”threatened to withhold funding for anything that he believes would infringe on the Second Amendment.

threatened to withhold funding for anything that he believes would infringe on the Second Amendment.

“It’s chipping away at our Constitutional rights,” Shelby said of Obama’s actions.

Other Republican members of the panel said the administration should instead focus on better enforcement of existing law.

Sen. Chris Murphy, D-Conn., a member of the panel, said, “I sort of feel that this is a hearing about a document that I haven’t seen.” He asked that the president’s initiatives be included in the records of the hearing. “I would hope that those who have a strong opinion on this guidance to take the time to read it,” Murphy said.

Murphy also lit into the witnesses who were critical of the president’s plan.

He asked Strange “what are the key parts that are an assault on the Second Amendment?”

Strange hedged, but when pressed again by Murphy replied, “I don’t have that in front of me.”

Cuccinelli responded to Murphy’s questioning by saying the new definition of “engaged in the business” of buying guns was vague and would deter collectors and others who may not fit the definition from selling firearms.

In announcing its executive actions, the Obama administration did not say how many gun sales required an individual to obtain a federal license and conduct NICS sales.

Instead, they provide examples though a series of court cases.

Cuccinelli told Murphy there are “circuit-to-circuit” differences in court rulings on who should be.

“I have complete confidence that the common-sense steps announced by the president are lawful. They are consistent with the Constitution as interpreted by the Supreme Court and the laws passed by Congress,” she said.

When Murphy asked how much money was needed, Lynch said an additional $35 million is needed to hire the new agents for the Bureau of Alcohol, Tobacco and Firearms and the FBI to “help improve the electronic platform of NICS.”

Obama has also asked Congress for an additional $500 million to boost mental health care, but that request has had a chilly reception.

After the contentious hearing, Cuccinelly and Strange had a long conversation about the issue.

“There’s a need to find common ground before we can move forward,” Barden said later. “It’s possible, but it’s not going to happen today.”