CSCU, union still at odds with arbitration deadline near 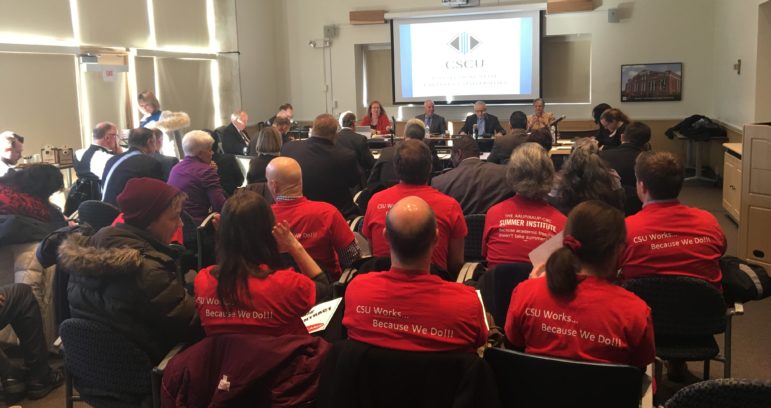 American Association of University Professors members wore red in a show of solidarity at a meeting of the Board of Regents for Higher Education on Thursday, Jan. 21. This was the final meeting for the board, which oversees the Connecticut State Colleges and Universities system, before the contract arbitration deadline with the professors union.

With a March 1 arbitration deadline looming and negotiations still tense, the professors union of the state’s largest public college system remains concerned about proposals that could threaten to eliminate tenure and move faculty to different universities.

Nearly two dozen faculty members, many wearing red shirts in a show of solidarity, attended the Board of Regents for Higher Education meeting Thursday morning in Hartford. The board, which manages the four Connecticut State University branches and 12 community colleges, heard concerns from four faculty members during the public comment period, but left the topic unaddressed during the meeting.

The meeting was the last before the arbitration deadline, as the board is not scheduled to convene in February.

CSCU President Mark Ojakian said he is pleased with the progress made thus far in the collective bargaining process, but has concerns about “misinformation” being spread to faculty members.

“Moving professors and losing tenure – that was never on the table,” Ojakian said. “There’s misinformation about what we were actually proposing.”

But members of the university system’s American Association of University Professors chapter insist this is not the case.

Elizabeth Newberg, a communication associate for the system’s AAUP chapter, said as far as she knows, proposals to relocate professors from their campuses – which AAUP argues would effectively eliminate tenure – are still on the table just as they were when both sides introduced their initial contract revisions on Oct. 1.

“You can talk a good game, but at the end of the day, those proposals are still there,” Newberg said. “Nothing has changed. And (Ojakian) has the power to be able to do that, to change that.”

Excerpt from the contract proposal put forward by the Board of Regents. (Click to enlarge.)

Faculty members told the board during public comment they were concerned both for their institutions and students if the contract remained in its original form.

Southern Connecticut State University history professor Troy Paddock said while he believed Ojakian’s intention isn’t to end tenure outright, the provision for professor relocation would “fundamentally undermine and effectively destroy tenure.” He said if the provision remained, it would be “abused” in the years to come.

“We have already seen people leave our system because of this contract,” said Kathleen Skoczen, the chair of the anthropology department at Southern Connecticut State University. “This contract threatens the very integrity of the state university system.”

The proposals “spooked” some professors, according to Central Connecticut State University sociology professor John O’Connor. He called the board’s proposal “an attack on the union” and “a slap in the face.”

Ojakian said this characterization is unfair and misinterprets the board’s call for “greater flexibility.” He also said the conversation at the negotiating table has evolved from the original proposals introduced by both parties on Oct. 1.

“We’re not looking to do some of the things that are being suggested,” Ojakian said. “But we are looking for a contract that provides us with greater flexibility in utilizing resources, which talks about the need to be more fiscally conservative in terms of what funding we’re getting from the state.”

While he would not name the specific compromises reached, he said a number of disputes have been settled with tentative agreements, meaning only a handful of issues have the potential to go to arbitration. The existing contract, which was enacted in 2007 and renewed with changes in 2011, is set to expire at the end of June.