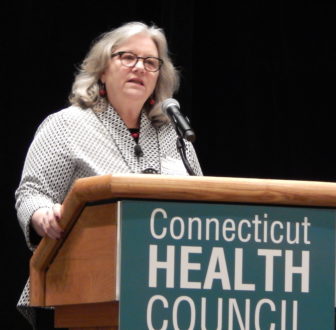 When a woman with a bad cough walked down the hall in Donna DeWan’s office recently, coworkers along the way asked about her health and offered cough drops and suggestions for getting care.

That led DeWan – the director of corporate programs for the National Council for Behavioral Health – to wonder: “What would happen if that very same person had withdrawn, looked sad, perhaps had some red-rimmed eyes and very quietly was walking by us?”

When she asked someone she knew, DeWan said, the answer didn’t surprise her: I wouldn’t address it.

Depression can take a big toll on workplaces, but too often, it remains hidden and unaddressed, DeWan said Wednesday. Her remarks were part of a program hosted by the Connecticut Health Council, which aims to promote the state’s health sector.

DeWan and other mental health and workplace experts said addressing depression matters for employers, noting its prevalence and links to reduced productivity, increased absences and worse outcomes for physical illnesses – and the fact that it’s highly treatable.

But the discomfort many feel about talking about mental health issues can exacerbate the problems, making workers less likely to seek help and keeping employers from offering accommodations that could help a person recover and stay on the job, DeWan and others said.

“The tragedy behind that is that depression’s a very treatable illness,” said Dr. Hyong Un, Aetna’s chief psychiatric officer, who also heads the insurer’s employee assistance program. “If you make an investment in treating diabetes, it takes about five years to get a return on investment. Treatment of depression takes about eight weeks” to start to feel better.

Surveys have found varying rates of depression, but one DeWan cited, conducted in 2014 by the Employers Health Coalition, found that 23 percent of workers surveyed said they had been diagnosed with depression in their lifetime. Among them, nearly 40 percent said they took time off from work because of their diagnosis, but 49 percent said they believed telling their employer about their depression would put their job at risk.

Another study projected that lost productivity among workers with depression in the U.S. costs companies $44 billion per year. The authors noted that many workers haven’t received treatment, and suggested that there could be cost-effective ways to improve depression-related outcomes in the workforce.

Gabriel Jiran, who leads the employer defense and labor relations practice group at the Hartford law firm Shipman and Goodwin, described a type of call he said it’s not uncommon to get from an employer wanting to fire a bad employee. When he asks for details, they tell him the person doesn’t come to work, doesn’t socialize and stays in their own world. And when Jiran asks if they’ve discussed the performance issues with the employee, the response is, “Yes, and guess what? They say they’re depressed.” Instead of exploring it, the employer has concluded the person is just a bad employee.

“You cannot just write off the fact that somebody says they’re depressed,” he said, noting that depression is a disability and employers have an obligation to determine if there are reasonable accommodations they can make.

“You have an investment in this employee, and you want to treat them as a human being as well as an employee,” Jiran added.

Much of the conversation focused on ways depression is treated differently from physical health conditions, and the discomfort many feel about addressing mental health issues. 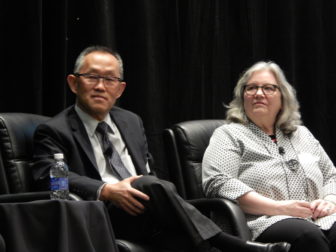 It’s not uncommon, DeWan said, for workers with depression to take disability leave rather than ask for accommodations that could allow them to stay at work; the latter would require telling their employer more about their condition and knowing that they might be seen differently by their peers.

“If you take somebody out of work because they’re depressed, it’s actually a crisis, because that person has lost now purpose and meaning,” he said.

Jiran, who moderated the panel, asked how to overcome the stigma.

“How do we help managers, in particular, overcome that reluctance to have the conversation, where they would easily have a conversation about somebody who breaks their leg, ‘How can I help you get back to work, how can we assist you to do your job?’” he asked.

The payroll company Paychex did extensive training in privacy and worked with managers to ensure they understood how far to take a conversation, said Marcy Crossman, the company’s senior manager of employee benefits and programs and absence management. They emphasized to managers the importance of having a sense of safety and trust in the workplace.

While employers must tell people about their right to take time off, Crossman said her company also asks what they can do and if it’s important to get back to work.

“What I found is there’s a high social connection at work,” she said. “They want to be back to those folks. They’re like family members. It’s very important to them.”

Jiran said legal concerns often make managers nervous, but added, “There’s nothing wrong with saying, ‘Is there something going on that we can talk about?’”

While the culture of a workplace matters, Un said it’s important to give people tools to begin what might seem like daunting conversations. He suggested training, such as Mental Health First Aid, a program intended to give people a basic knowledge of mental illness and the ability to respond if they see a person who needs help.

Un also said emerging technologies can help. He cited an online cognitive behavioral therapy module that people can do at home, which Aetna now uses in its employee assistance program. Although the therapy has been found to be effective in treating depression symptoms, Un said it can be pitched as teaching skills for dealing with stress or becoming stronger and more resilient – things that might make people, particularly men, more open to seeking help, he noted.

DeWan suggested that employers examine what they offer employees – try calling the employee assistance program to see what it’s like, for example – and show up to lunchtime seminars the company holds. When she’s done Mental Health First Aid training for businesses and senior leaders share a story, others in the company tend to speak more freely.

Businesses have been remiss in addressing depression, opening up the conversation, she said.

“Most businesses aren’t going to say, ‘Oh please, we’ve got 20, 25 percent of our people who are just mentally ill, that’s how our employees are,’” DeWan said. “Well, the reality is that that probably is not a bad number.”