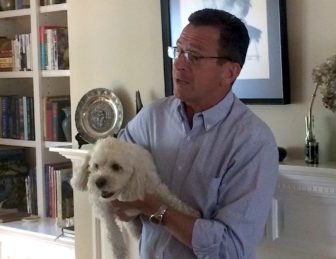 In August, Gov. Dannel P. Malloy had an easier time grabbing his New Hampshire audience’s attention once he picked up the family dog, Bella.

Gov. Dannel P. Malloy and at least three of Connecticut’s seven-member congressional delegation are campaigning for Hillary Clinton in New Hampshire over the next few days, all elements of an establishment firewall trying to protect against a surging Bernie Sanders.

They are four of the 15 super delegates from Connecticut, elected officials and other establishment figures who are automatic delegates to the Democratic national convention and are expected to back Clinton regardless of her performance in the state’s primary on April 26. Seventy other delegates will be apportioned based on the Connecticut primary results.

Sanders, the Vermont senator, is leading Clinton in New Hampshire, competitive in Iowa and now has organizational help as a result of the endorsement of the Working Families Party, a labor offshoot with a significant presence in Connecticut.

Connecticut’s presidential primary is relatively late. But the primary calendar is stretched out this year with delegate-rich California and New Jersey among the final half dozen states to hold primaries on June 7.

“If you look at recent polls and data, it looks like Connecticut will have a relevant primary,” said Lindsay Farrell, the executive director of the Working Families Party in Connecticut.

His party is focusing on helping Sanders in New Hampshire, whose primary is a week from Tuesday, and in Massachusetts, one of 13 states with primaries on March 1.

“At that point, I think we’ll start to focus on our local primary,” she said, adding that interest is high in what she called Sanders’ message of social justice and his focus on economic equality. “New people are coming out of the woodwork.”

The Working Families Party is financed by labor and has strong ties to the Democratic Party, generally cross-endorsing supportive Democrats, as it did with Malloy in 2010 and 2014, helping him win close races. Sanders is the first presidential candidate to win its endorsement.

But the political establishment remains with Clinton, giving her a significant head start in the hunt for delegates. Officials like Malloy already are designated super delegates by virtue of their offices. Based on a survey by the Associated Press late last fall, Clinton was believed to have commitments from more than 350 super delegates, compared to fewer than 10 for Sanders. Most of the rest were uncommitted.

There are 712 super delegates, about 30 percent of the number necessary to win the nomination at the Democratic National Convention in Philadelphia in July.

The Connecticut super delegates include the seven members of the state’s congressional delegation, all of whom have endorsed Clinton. Most have campaigned or plan to campaign for Clinton in New Hampshire. U.S. Sen. Chris Murphy is visiting Monday, while U.S. Reps. Joe Courtney of the 2nd District and Rosa L. DeLauro of the 3rd will be there over the weekend.

U.S. Reps. Jim Himes of the 4th District and Elizabeth Esty of the 5th District also plan on a trip north before Feb. 9. Himes recently set an email solicitation looking for volunteers to join him.

Malloy, who has twice gone to New Hampshire to tout Clinton, has five stops Friday and Saturday. He said he intends to talk about Clinton’s long-standing support for gun control.

The other super delegates are: Nick Balletto and Nancy DiNardo, the chair and vice chair of the state party; three Democratic National Committee members, John Olsen, Michael Cacace and Dorothy Mwroka; Joanne Sullivan, the president of the National Federation of Democratic Women; and Chris Dodd, the former senator and Democratic national chairman.

One thing is unchanged since Malloy’s first trip to New Hampshire in August: Clinton’s emails as secretary of state were an issue last summer, and they were back in the news Friday.

The State Department released another 2,000 pages of emails Friday, but warned that a final batch of messages will be unavailable for weeks, meaning their release will come after the Iowa caucus and early primaries.

Malloy defended the former secretary of state’s handling of questions about using a private email server.

“She kept her emails exactly the same way as her two predecessors, but she’s released 30,000 of them. You have not seen 30,000 emails from either of her predecessors. In fact, you’ve not seen 5,000,” Malloy said. “There is a certain unfairness to what’s going on, but listen, I’m in politics. I know about that stuff.”

He spoke to reporters in Hartford before the news of the 22 emails broke.

Ana Radelat contributed to this story.