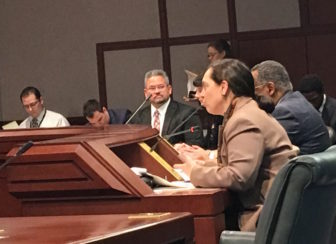 The Department of Children and Families faced intense scrutiny from state legislators Thursday morning for not identifying a number of high-risk child abuse cases, and several top officials acknowledged the department’s shortcomings and described steps that have been taken to improve.

Members of the Committee on Children questioned Commissioner Joette Katz and her staff for first time since the release of a December report by the Office of the Child Advocate showing DCF missed numerous warning signs in the 2014 death of a 2-year-old girl in Terryville.

Katz expressed regret for the department’s handling of the case.

“We take every, every fatality to heart almost … as if it happened to our immediate families,” Katz said. “Frankly, that case was not our best work, and I will never say otherwise.”

Concern has mounted about whether the department is correctly assigning the appropriate risk level to child welfare cases reported to it.

Susan Smith, the department’s chief of quality and planning, said an internal investigation last year found the agency correctly designated the risk level 93 percent of the time. However, it declined to accept 12 percent of cases when it should have, Smith said.

Cases designated high-risk are assigned for investigation, and lower-risk cases are referred to the Family Assessment Response (FAR) program. Participation in the FAR program is voluntary. It offers support services provided by nonprofit agencies, and the cases are no longer part of the DCF caseload.

Kristina Stevens, administrator for clinical and community consultation and support team, said that, since March 2012 when the department began collecting data, 30 percent of cases referred to the FAR program eventually resulted in another report of suspected abuse or neglect to DCF.

The agency is doing a review in partnership with the UConn School of Social Work to see if there are gaps in services that could account for the rate of repeat referrals to DCF. Stevens added that she hoped the partnership with UConn would produce better, more detailed data.

“(It was) my impression the stats were very different,” Bartolomeo said. “Some of the articles we’ve seen, some of the other reports we’ve seen have not been as close to 93 percent correct referrals. . .” she said. “I’d like to understand the difference in what I’ve seen reported elsewhere and what we’re being told now.”

Smith said the difference is explained in part by the number of cases reported multiple times, where any reports after the initial one automatically will be declined.

The department’s office of administrative case review looks at more than 13,000 cases each year to evaluate whether they are being correctly assessed, DCF officials said.

The discussion pivoted from data to procedural changes as the meeting progressed.

Sen. Henri Martin, R-Bristol, pressed officials on how the child welfare reporting system had been improved since the 2014 death in Terryville – a town in his district.

Katz acknowledged that reports in the Terryville case should not have resulted in a FAR referral. Instead, she said, it should have received a higher-risk designation.

Agency officials said they have made several changes since the death of the Terryville child. Those include requiring any report that involves the alleged abuse or neglect of a child age 3 or younger be reviewed by a DCF administrator before being assigned to the lower-risk group.

Administrators also have begun sitting down with the social workers who take incoming reports to review two phone recordings each month for cases that were referred to the FAR program to determine whether the referral was appropriate.

Martin said “any steps they take are positive,” but he said he felt more could be done to improve the process. Specifically, he asked if there are any criteria that automatically raise the risk level of cases.

In the death of the 2-year-old girl, police were contacted and had investigated possible abuse one month before her death. Martin said he believes any police contact should immediately increase the risk level assigned to a case.

Bartolomeo commended the agency the steps it has taken to improve since this death. “It’s very clear to me that since that tragic experience there has been considerable overhaul of this system, and I appreciate that,” she told the commissioner.

An August 2015 study conducted by the University of Connecticut School of Social Work’s Performance Improvement Center found 16 children assigned to FAR died between March 2012 and April 2015. It also found 11 to 13 percent of cases annually had to be reassigned from their initial FAR designation to investigation.

The number of reports designated as FAR increased from 36 percent in January 2014 to 44 percent in June 2015, according to the study.

Updated Feb. 5 at 4:10 p.m. with additional details from the hearing on steps DCF has taken.