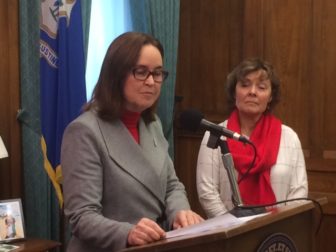 Secretary of the State Denise Merrill, left, with Cheri Quickmire of Common Cause.

With about 30 percent of eligible voters unregistered, Secretary of the State Denise Merrill is asking the General Assembly to enable people to automatically register as Connecticut voters when they do business with the Department of Motor Vehicles.

The concept is being promoted nationally by the Brennan Center for Justice as the next step in a movement to provide the same ease in voter registration that is found in modern commerce – in other words, something that can be done quickly, automatically and, preferably, online.

Automatic registration legislation is pending this year in more than a dozen states.

Merrill, a Democrat, downplayed partisan politics in outlining her proposal Monday in a press conference, saying she saw no political advantage for either party in a system that automatically registers voters at the DMV unless they decide to opt out.

“I think those concerns are misplaced,” she said.

Cheri Quickmire, the executive director of Common Cause in Connecticut, said young voters, the unemployed and renters are the least likely to engage in electoral politics. Automatic registration would reduce the number of voters who fall off the voting rolls when they move, she said.

Carol Mulready of the League of Women Voters said her group was confident automatic registration could increase participation without sacrificing accuracy.

The measure could add 400,000 voters to the rolls in Connecticut, Merrill said. The Brennan Center, based at New York University, says a national law could mean as many as 50 million additional voters.

The ranking Republicans on the legislature’s Government Administration and Elections Committee, which will review the proposal, reacted skeptically. They noted Connecticut already allows voter registration by mail, through the DMV, online and on election day.

“I’m in favor of us making sure voting is accessible. It currently is,” said Sen. Michael McLachlan, R-Danbury. “We have plenty of opportunities for people to register to vote with minimal effort. It’s already there.”

Rep. Richard Smith, R-New Milford, questioned the wisdom of imposing additional responsibility on the DMV, particularly one that would require changes to its computer systems, while the department is struggling with a number of major computer problems.

“We all know the issues there,” Smith said. “Until they are worked out, I wouldn’t want to add anything else.”