No surprises on ballot choices for CT presidential primary 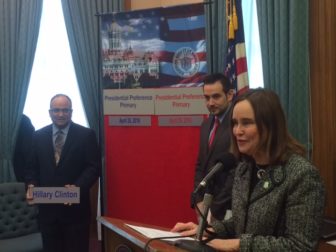 Democrat Nick Balletto promoted his candidate at an event with Republican J.R. Romano and Secretary of the State Denise Merrill.

One of the differences in the Democratic and Republican presidential races was evident Tuesday as the state party chairmen joined Secretary of the State Denise Merrill in announcing the names of two Democrats and six Republicans who will be on Connecticut’s presidential primary ballot.

Tasked with holding name cards to be posted as Merrill announced the choices, Democratic State Chairman Nick Balletto displayed Hillary Clinton’s card face up, a reminder that the party establishment has chosen her over Bernie Sanders. His neutral GOP counterpart, J.R. Romano, held his six cards face down.

There were no surprises or controversies in Merrill’s choices for the April 26 primary in Connecticut: Clinton and Sanders on the Democratic side; the Republicans are Jeb Bush, Ben Carson, Ted Cruz, John R. Kasich, Marco Rubio and Donald J. Trump.

Balletto and Romano posted the choices in alphabetical order, the names appearing as chosen by the campaigns: Kasich and Trump standing alone in using full names. Actual ballot order will be determined by lottery on March 22, a date set by state law.

“It’s truly an exciting and a fascinating year,” Romano said. Balletto called the primary, “Connecticut’s opportunity to have its voice heard.”

Connecticut is one of five states holding a Northeastern regional primary on April 26: The others are Delaware, Maryland, Pennsylvania and Rhode Island.

New York’s primary is the previous week on April 19. Massachusetts and Vermont are among the 14 states participating in “Super Tuesday” by holding primaries or caucuses on March 1.