Sen. Maynard announces he will not seek re-election 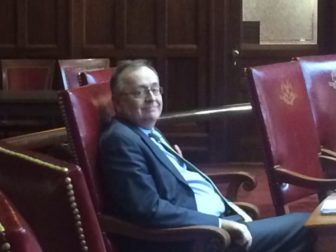 Sen. Andrew Maynard at the Capitol on Thursday.

Sen. Andrew Maynard, D-Stonington, whose ability to serve has been questioned since he suffered a traumatic brain injury in 2014, announced Wednesday he will not seek re-election in November after 10 years in the Senate.

Questions about Maynard’s abilities intensified in recent weeks after he flipped his car driving home from the State Capitol.

“I want to thank everyone for their prayers and well wishes, and I am grateful to live in such a beautiful and supportive community,” Maynard said in a press release.

Maynard, who has not granted an interview since his return to the Capitol at the start of the 2015 session, attended a Senate session Wednesday to vote on judicial and executive nominations. Asked if he intended to discuss his retirement, he replied, “Not yet.”

Republicans already were viewing Maynard’s seat as vulnerable, whether he ran or not. Maynard was re-elected in 2014 without being able to campaign, easily defeating a weak candidate. But Heather Somers, a former Groton mayor who was the GOP nominee for lieutenant governor in 2014, is expected to run and offer formidable opposition.

The Day of New London reported that Somers was to announce her candidacy Wednesday.

Maynard’s 18th District along the Rhode Island border is rural and relatively conservative. Maynard was one of only two Democrats in the Senate who voted against the post-Newtown gun control law in 2013. The other was Cathy Osten, whose district abuts Maynard’s.

He sided with business by voting against the expansion of workers’ compensation and a law requiring certain private employers to offer paid sick days, but he voted for minimum wage increases in 2013 and 2014.

Maynard also voted to repeal the death penalty, decriminalize small amounts of marijuana and legalize the production and sale of marijuana for limited medical uses.

Democrats hold a 21-15 majority in the Senate, but the loss of one or two seats could complicate the passage of a budget in 2017, given the fiscal conservatism of three members of the Democratic majority.

Maynard is the second senator to announce he will not seek another two-year term this fall. The other is Sen. Clark J. Chapin, R-New Milford.