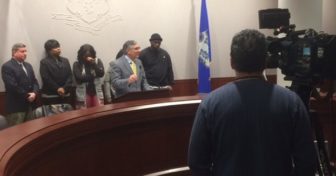 J. Paul Vance Jr., the claims commissioner under fire for awarding $16.8 million last month to compensate four member members of a New Haven gang whose murder convictions were set aside, has submitted a resignation letter to Gov. Dannel P. Malloy.

Vance said Friday he submitted his letter last week, effective on March 4 or whenever Malloy names a successor. His term had expired months ago, but the law allowed Vance to remain as commissioner until Malloy made a decision on a reappointment.

His resignation was disclosed after Senate Minority Leader Len Fasano, R-North Haven, publicly challenged Malloy to choose a successor or reappoint Vance, so he could face a confirmation hearing by the General Assembly.

“I challenge the governor to reappoint this person and see if he gets through the process,” Fasano said at a press conference attended by relatives of Jason Smith, the man killed in the New Haven case.

Legislators and the attorney general’s office have raised questions about Vance’s role as the sole authority over how Connecticut reimburses the wrongly incarcerated since Vance awarded $4.2 million to each of four former members of a New Haven street gang, the Island Brothers.

In three previous wrongful conviction cases, DNA evidence exonerated the men awarded damages and convicted others in their place.

Questions about a $16.8 million award — and the meaning of innocence

But the case of the Island Brothers – Carlos Ashe, Darcus Henry, Sean Adams and Johnny Johnson, convicted in an ambush of rival gang members in 1996 that left Smith dead and two others wounded – presents harder questions about what the state owes former convicts whose freedom comes from a finding of prosecutorial misconduct or other trial errors, not proof of actual innocence.

After years of appeals, the Connecticut Supreme Court ruled on July 23, 2013, in Adams’ appeal that a prosecutor’s repeated failure to correct the record and inform the jury that Andre Clark, a survivor of the shooting, was lying when he denied testifying against his accused attackers under a plea agreement that could keep him out of prison in another case.

Two days after the ruling, the New Haven state’s attorney, Michael Dearington, dismissed charges against all four men, saying new trials were impossible after the passage of 17 years and the absence of a key witness: Clark, who was shot to death in 2008. All four were released from custody, three of them still wearing orange prison jumpsuits.

Vance had no apologies Friday for the award. He said he applied the facts to a compensation law that requires claimants to show by a preponderance of the evidence they were released for reasons of actual innocence or grounds “consistent with innocence.” 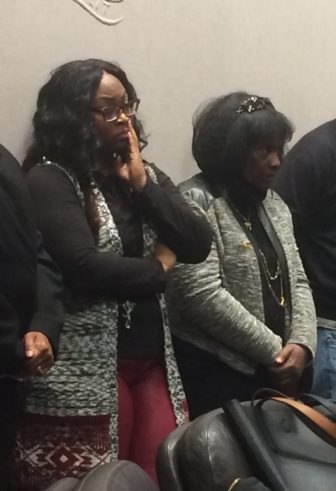 “It’s my job on every case, including ones that have a high dollar amount and controversial circumstances, to apply the facts to the law,” Vance said.

Vance said he understood the anger of Smith’s family.

“I’m very sorry for the loss of their son,” Vance said. “I wouldn’t want to walk in their shoes.”

His resignation letter was released by the governor’s office. It was dated Feb. 12 and made no mention of the controversy, only his desire to stay long enough to finish several cases and see the completion of a new case-management system.

Vance offered no opinion as to whether the compensation law should be changed. Vance has exclusive authority over two types of claims against the state: awards of $20,000 or less, and wrongful incarceration cases, which can yield multi-million dollar damages. Everything in between is subject to legislative review or a trial in Superior Court.

Fasano said the legislative record makes clear that legislators intended that wrongful conviction awards of more than $20,000 also should be subject to legislative review. He said the law, which he voted for in 2008, might be clarified this year.

A prosecutor’s decision not to retry a case does not equate to proving innocence by a preponderance of the evidence, said Sen John Kissel of Enfield, the ranking Republican on the Judiciary Committee.

“In that instance, we feel the claims commissioner failed,” he said. “We need a process where it comes before us, the House and the Senate.”

The Supreme Court offered no clearcut guidance on its thoughts of Adams’ innocence. It noted that the failure to correct the perjury may be immaterial in cases where the evidence of guilt was “overwhelming,” but that was not the case before the court. Justice Richard Palmer, a former prosecutor, wrote in a unanimous opinion that the state’s evidence for conviction was “certainly sufficient” for conviction, but “not particularly strong, let alone overwhelming.”

Even one of the victim’s relatives, who joined Fasano at a press conference Friday  to object to the awards, said she believes one of the men to be clearly innocent.

The jury in the first trial deliberated for 10 days before convicting Adams, but deadlocked on two of the other three defendants, who were convicted at a subsequent trial. Palmer concluded “the jury viewed the case as a relatively close one.”

Victor Sipos, a lawyer who represented the four men during the claims process, did not object to legislators reviewing the law.

“But it is inaccurate to state that Claims Commissioner Vance somehow misinterpreted the law,” he said. “In fact, the four New Haven men’s eligibility for compensation is beyond legitimate dispute. A panel of Connecticut judges and attorneys who comprise the impartial Connecticut Innocence Fund Advisory Committee reviewed the facts of these four men’s situation and unanimously agreed they were entitled to compensation under Connecticut law.”

Fasano said there are no grounds for the legislature to recapture the payments. He was accompanied by Smith’s relatives.

“There’s nothing they can do about it,” said Robin Nelson, his mother.

“She came here for justice for her son,” said Raymona Holloway, a cousin of the victim. “To find out that the guy who took her son’s life basically was paid to do it, that’s how it seems. It is hard. it’s one thing to get out for a technicality, but to get rich…”

But Holloway had been a defense witness for Johnson, her boyfriend at the time. And she vouched again Friday for his innocence, undercutting the complaint that all of Vance’s awards were a miscarriage of justice.