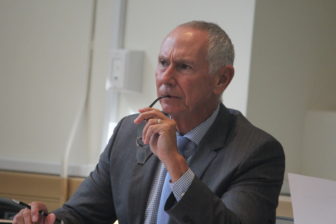 The 3 to 6 percent pay raises non-unionized staff at the state’s largest public college system were expecting to receive beginning next month have been put on hold.

“I am deferring a decision on any salary increases for management and confidential professional employees until the conclusion of both the legislative session and collective bargaining negotiations,” Mark Ojakian, president of the Connecticut State Colleges & Universities (CSCU) system, informed the 300 administrative staff slated for raises.

The raises were expected to cost the college system as much as $2 million a year. The 5.5 percent raises for unionized staff, required under a current contract, are still moving forward and have not been deferred.

This decision comes as the spotlight at the state Capitol has been on the state’s other public college system, the University of Connecticut, and proposed 3 to 4.5 percent raises for unionized, non-teaching professional staff. The legislature is now considering whether to allow the contract that would provide those raises to go into effect. Yesterday, Gov. Dannel P. Malloy said the raises do “not fully represent the new economic reality” of the state. Sixteen of UConn’s non-unionized staff received raises of up to 5 percent this fiscal year, which cost the school $36,118.

Like UConn, the CSCU system is facing major budget shortfalls, and the governor has proposed cutting millions in support. The system is currently in a contentious negotiation with unionized staff.

Nearly 15% of the students enrolled at Connecticut community colleges have received non-medical exemptions from the system’s COVID-19 vaccine mandate, a rate that administrators suggested could […]