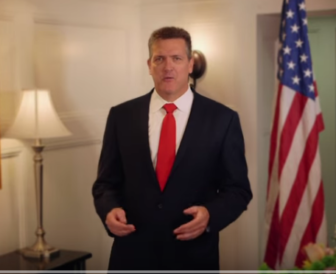 August Wolf in the campaign video announcing his candidacy.

It should be the best of times for August Wolf. His only rival for the Republican nomination for U.S. Senate recently stepped aside, yet Wolf’s campaign is coping with allegations of a hostile work environment, turnover of top staff, tight money and the threat of civil action by the Federal Election Commission.

On Feb. 18, two days after CNBC commentator Larry Kudlow surprised Republicans by announcing he would not seek their nomination, seemingly opening a clear path for Wolf, the FEC notified his campaign of potential sanctions over the surprising failure to file a year-end finance report.

Matthew R. MacFarlane, 22, an intern who eventually took over the dual positions of the campaign’s manager and treasurer before leaving the campaign on Jan. 24, says Wolf, a former Olympic shot putter and Stamford businessman, will be shown to have had only $10,000 cash on hand once he files the overdue report.

U.S. Sen. Richard Blumenthal, a Democrat who won the open seat in 2010 after 20 years as Connecticut’s attorney general, ended 2015 with $3.9 million in his campaign account, near-total name recognition and job approval and favorability ratings above 60 percent.

Perhaps more troubling for the GOP and its only announced candidate is what MacFarlane and other former staffers described as Wolf’s abusive behavior and a hostile work environment, which led to the firings or resignations last month of the campaign’s manager, communication director and field director. 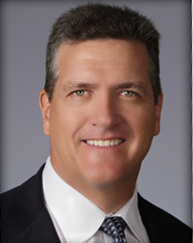 Former staffers described Wolf as sharing stories about a long-ago sexual escapade with one, gossiping about the romantic life of a gay staffer with another.

“We called him basically a grown-up frat boy,” said Michael Napoli, a former field director. “That’s what he is.”

Troy Meeker, the communication director who eventually took on co-manager duties with MacFarlane, said things came to a head when he and Napoli were late to a Grassroots East political dinner on Saturday, Jan. 23, leaving Wolf to accuse his staffers of deliberately embarrassing him.

MacFarlane, who drove Wolf back to Stamford in the candidate’s car, said Wolf fumed on the way home, saying from the back seat, “Matt, do you think Blumenthal’s people would treat their candidate like this?” Rather than go back to the headquarters, where MacFarlane’s car was parked, Wolf ordered him to drive to the candidate’s condominium.

It was 1 a.m. on a frigid night. MacFarlane says Wolf took back his car keys and left him in the cold, not asking how he would get back to the headquarters.

MacFarlane was able to summon a ride on Uber.

The next day, he was fired.

Napoli and Meeker say they quit the same weekend. Meeker said he told Wolf that the campaign atmosphere was toxic, but declined to be specific in a face-to-face meeting, saying the six-foot, six-inch Wolf was an intimidating presence, especially when angry.

Meeker, who is gay, sent a letter Thursday to Wolf, accusing the candidate of gossiping about Meeker’s romantic life in “a manner that is negative and hostile,” offending millennials on the staff and contributing to a hostile work environment.

“This is not a speculation of mine – I know it to be fact that your dialogue about my relationships and me has put many on edge,” Meeker wrote.

He told Wolf, whom he addressed as “Augie” in the letter, that he did not believe the candidate meant to be cruel.

“I do not believe you have ever intended to be hateful or homophobic, however unfortunately your intentions are irrelevant to how it is perceived,” Meeker wrote. “And in this case, your behavior and this situation have been perceived as a personal attack on me because of my sexual orientation.”

He provided a copy to The Mirror.

MacFarlane said Wolf once asked him if Meeker had “turned” another staffer gay.

Wolf’s campaign did not dispute MacFarlane’s claim that the campaign ended 2015 with only $10,000, nor did it explain in detail why it failed to file a report that MacFarlane says was complete. A spokeswoman says only that the campaign wants to conduct an audit before disclosing the money it raised and spent over the last three months of 2015.

Amy Maginnis, the new communication director, did not answer questions The Mirror posed in writing about the status of the campaign or the reasons why the first campaign manager, treasurer and finance director all quit or were fired before Wolf handed control of his campaign to three young men in their 20s.

Instead, she emailed a one-paragraph statement:

“The campaign’s internal audit is almost complete and as a successful business leader, August demands accountability. He looks forward to spending the coming weeks and months visiting with Connecticut residents and sharing his vision of championing the American dream.”

The questions were posed before Meeker shared his letter, and the campaign had no immediate comment Thursday or early Friday about the allegations of insensitivity to gays.

Wolf, a financial advisor for endowments and individuals, launched his campaign in early May, quickly raising $260,801, mostly from donors who could afford to write checks for $2,700, the maximum allowed by federal law.

An analysis of his donor records shows that Wolf relied on just 16 donors, including himself, for double and triple contributions that totaled $110,700, but some of that money will have to be refunded if Wolf does not face a primary or drops out before the general election.

Donors can give the maximum of $2,700 for each of what the FEC considers to be discrete contests in an election cycle: a nominating convention in May, a primary in August if the convention endorsement is challenged, and the November general election.

The law allows donors to write three checks for $2,700 at the outset of a campaign, which makes the early fundraising totals more impressive – even if much of the money is unavailable until after the convention.

But his fundraising dropped by more than two-thirds in the next three months: He reported raising only $83,928 in the October report, and the first of his campaign managers, Tom Daly, departed as it became clear resources would be tight.

Daly declined to say in detail why he left, nor would he give an assessment of the candidate or describe the work environment. His only comment: “I had serious doubts about the direction of the campaign.”

A woman Daly recruited as finance director quit after five weeks, departing at about the same time as Daly. The woman, who asked not to be named in the story, declined to discuss her experience working for Wolf, saying only that she had “moved on.”

MacFarlane never expected to be a campaign manager.

“Honestly, the big step was being hired as field director. That, to me, was amazing,” he said, referring to a job responsible for organizing volunteers. “When Tom Daly left as manager, I was the only one willing to do it.”

When Wolf ordered him to fire the original treasurer, Christophe Esposito, who could not be reached for comment, MacFarlane took over that job as well, in early December. He wonders if that was a mistake.

MacFarlane said he agreed to speak about the campaign, because he fears that Wolf is going to attempt to hold him responsible for any financial irregularities. According to FEC records, MacFarlane was treasurer for seven weeks, from Dec. 6 to Jan. 24.

Some of the former staffers are seeking back wages, and at least one has filed a complaint with the Department of Labor. They say Wolf skirted wage and hour laws by classifying employees as independent contractors, allowing the campaign to pay less than minimum wage.

Wolf is now on his third leadership team in nine months.

His new campaign manager is a man who declined to share his name with The Mirror, other than to say he wants to be known simply as “Sarge.”

“I’m going by Sarge, sir,” he said, describing himself as a veteran of military service in Iraq and three congressional campaigns. “This campaign is about August Wolf and the people of Connecticut. I’ll be going by Sarge during this campaign.”