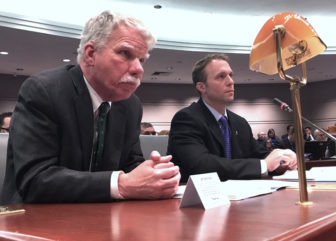 A number of legislators expressed skepticism Thursday about a bill that would allow law enforcement officers to ask to see an individual’s state-issued pistol permit without reasonable suspicion of a crime.

While some legislators voiced support for the bill, others raised concerns about its constitutionality and its practical effects during a Public Safety and Security Committee public hearing.

In addition to removing the requirement that there be “reasonable suspicion of a crime” before asking for a permit, an officer would no longer have to see a weapon to ask someone to show a permit.

Chief State’s Attorney Kevin Kane said in his testimony that legislators should expect to see a constitutional challenge if the bill is signed into law.

“There is a constitutional issue that could be raised and probably will be raised,” Kane said. “I believe (the bill) will be upheld.”

Sen. Ed Gomes, D-Bridgeport, expressed strong opposition to the legislation. He said he believed it could lead to officers subjecting individuals to searches without any reasonable suspicion of a crime.

Rep. Linda Orange, D-Colchester, said she was concerned it could lead to profiling.

Supporters of the legislation said that was not its intent. Farmington Police Chief Paul Melanson said the legislation is about identifying those who are illegally carrying a weapon, not targeting someone who may have “any bulge” in his or her clothing.

While Melanson said the language of the legislation is not final, Kane said he believes the current wording is “good,” though he said he is open to a better option.

Sen. Timothy Larson, D-East Hartford, the Senate co-chair of the Public Safety committee, said the legislation wouldn’t be “an intrusion of anyone’s rights.”

“I see this as sort of a recognition of a void in the current law and an opportunity to allow police officers to do a better job policing,” Larson said.

Rep. Kurt Vail, R-Stafford, made a comparison between existing laws about pulling over a driver and stopping an individual openly carrying a handgun – two actions he said are equally legal.

Vail asked Kane and Melanson a line of questions about whether someone could be pulled over by an officer simply for driving, much as this legislation, he said, would allow officers to ask to see a permit simply for carrying a handgun openly.

Kane said while an officer cannot pull someone over while driving within the limits of the law, every vehicle on the road is required to display a license plate that includes an identification number and proof of registration. The requirement to show an officer a permit upon request would function much the same way as a license plate, he said.

The legislation strikes a balance, Kane said, allowing officers to determine if an individual is carrying a weapon legally while avoiding any violation of an individual’s right to carry a firearm. 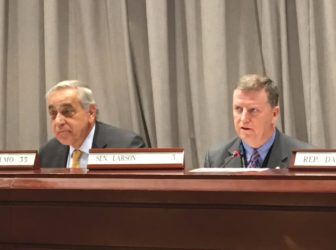 Sen. Tony Guglielmo, R-Stafford, said he understood the concerns of officers and the difficulty of finding a balance, but that the threat of a constitutional challenge concerned him even more.

“I could see this being a case that could be tried – and there’s people who are willing to and have the money to push it forward,” Guglielmo said. “I think it’s problematic.”

Kane said concerns about the financial impact of litigation should not influence the final vote.

An NRA representative said he shared the many concerns expressed by the legislators, including the question of the proposal’s constitutionality.

“(The bill) infringes on the rights of those who choose to exercise their Second Amendment right to keep and bear arms while doing nothing to deter criminals,” Kopacki said. “Stopping, detaining or frisking a person is a seizure under the Fourth Amendment, no matter how brief.”

Kopacki also said the legislation could create a police environment where there is “constant harassment and abuse of law-abiding citizens,” especially in minority communities.

But some argued the danger of gun violence should outweigh other concerns. A representative for Connecticut Against Gun Violence urged legislators to pass the bill to protect innocent lives.

“Here’s the problem with the current law: Lives may be in danger if police have to wait,” said Marty Isaac, president of the organization’s board.

Isaac said the current standard of reasonable suspicion does not adequately protect the public, because police may hesitate to ask for permits because of what he said is ambiguity in the reasonable-suspicion threshold.

The committee introduced the legislation after a January incident during which officers repeatedly asked a man openly carrying his handgun at a Subway restaurant in Bridgeport to show his pistol permit. The man refused each time, saying the law requires the officers to have “reasonable suspicion of a crime.”

Melanson said carrying a pistol without a permit is a crime, but the current law does not provide any way to verify when an individual might be violating it. He said officers across the state came together to propose the change to the existing law.