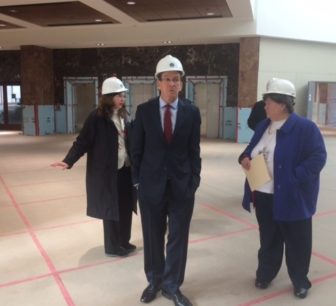 Eager to capitalize on a soft real estate market and escape expensive leases, the administration of Gov. Lowell P. Weicker Jr. purchased three Hartford office towers in the early 1990s. But two of the deals quickly proved to be losers, a cautionary tale as the state once again is bullish on real estate.

An aging skyscraper at 60 Washington St. remained empty until its demolition in 2008, ultimately deemed too expensive to renovate and use. The other, a relatively new 20-story office building at 25 Sigourney St., was occupied, only to be labeled a “sick building” with chronic leaks and mold outbreaks.

Now, after the administration of Gov. Dannel P. Malloy has spent about $120 million on the purchase and renovation of two office buildings in another depressed Hartford real estate market, again with the goal of shedding leases and consolidating state employees, the state seems to be having better luck.

One acquisition, a 12-story building at 55 Farmington Ave. was purchased and renovated for $37.5 million, allowing the state to vacate space in East Hartford that was leased during the administration of Gov. John G. Rowland at a cost of $67 million over the previous 15 years.

The State’s real estate acquisitions
The state is investing in Hartford real estate with an eye toward escaping expensive rentals.
Department of Administrative Services, state budget

The other is Connecticut River Plaza, a two-tower complex at 450 Columbus Boulevard that was purchased for $34.5 million and is undergoing a $48 million renovation. Work is on budget and schedule, as Malloy was told during a recent hard-hat tour, with the first of 2,200 state employees to move in this summer.

A cost-benefit analysis of the River Plaza deal, which also required the $26 million purchase and renovation of the nearby eight-level Morgan Street garage from the city of Hartford to provide employee parking, is more complicated than Farmington Avenue.

The River Plaza acquisition is the linchpin in a series of moves that eventually will allow the state to exit another expensive lease: the rental of 55 Elm St., a block from the Capitol, that has cost about $50 million over the past decade.

“This makes it all work,” Melody Currey said during a tour of Connecticut River Plaza. She oversees the state’s real estate portfolio as the commissioner of administrative services. “You have to empty out the State Office Building to make it all work.”

The offices of the attorney general, comptroller and treasurer eventually will leave 55 Elm for the renovated State Office Building.

The costs are considerable. Aside from the $146 million invested in the two recently acquired office buildings and garage, the state is looking at a budget of about $201 million to renovate the State Office Building and construct a nearby parking garage.

The Bond Commission recently approved borrowing $20 million to design the office renovations and a new garage, which will replace a smaller, obsolete parking structure that was built in 1968 and acquired as part of the ill-fated 60 Washington St. deal.

Malloy’s budget proposal now before the General Assembly includes $181 million in additional bonding for construction of the garage and renovations to the State Office Building, which would be gutted.

Malloy said he is confident the state is making a good investment as it provides office space that is better for employees and more convenient for the public. 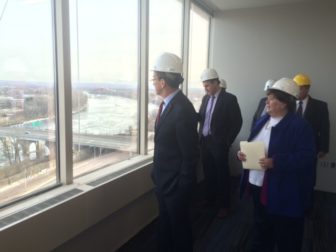 The governor checks the view from what will be the office of Kevin Sullivan, commissioner of revenue services.

“We did a lot of work on it, understanding the state of the buildings being offered, the maintenance,” said Malloy, who recently toured the properties he’s added to the state’s portfolio. “We went through them all in a fairly detailed way, and we had a feeling of what we were buying.”

Rep. Vincent Candelora, R-Branford, is a critic of the overall level of borrowing during Malloy’s tenure as governor, but he said the State Office Building project “fits into a larger scheme” aimed at reducing leasing costs.

The purchases and renovations are part of a master plan that will move thousands of state employees.

Step one was buying and renovating 55 Farmington Ave., which The Hartford built in 1990 across from its headquarters and is now home to 1,250 state employees. The Department of Social Services moved there last year from 25 Sigourney St., as did information technology workers who had been based in offices on East River Drive in East Hartford that cost nearly $25.94 a square foot, the most expensive rent paid by the state.

“That was a bad lease,” Malloy said.

The Department of Revenue Services will leave Sigourney Street this summer for Connecticut River Plaza, a complex of 11- and 15-story offices built above a five-level parking garage in 1984 by Richard Gordon, the real-estate developer who once owned the Hartford Whalers. Its most recent tenant was United Healthcare, which moved to CityPlace.

Kevin Sullivan, a former Senate leader and lieutenant governor who is the commissioner of revenue services, said his employees are looking forward to occupying renovated office space that comes with access to a garage within walking distance. A garage at Sigourney Street was closed because of structural defects, forcing employees to take a shuttle bus to satellite parking.

“Everybody, at worst, gets to walk a half block to the best parking garage in the city of Hartford, rather than ride a bus, which most people have been doing here for the better part of three years,” Sullivan said.

The renovations at Connecticut River Plaza include a welcome center on the ground floor, where the public will be able to pick up tax forms and conduct certain transactions, some at computerized kiosks.

“The public will be able to do a lot of business in the lobby,” Sullivan said.

Another plus is that some employees who have worked remotely after falling ill at Sigourney Street once again will be based at the department’s headquarters.

“Getting out of Sigourney was important to me, from day one,” Malloy said. “It’s a building that has real problems, and it was time to pull our employees out of there, and that’s what we’re doing.”

Sullivan’s department will occupy much of an 11-story tower at the River Plaza. On his tour, Malloy stepped into a corner office with impressive river views that will belong to Sullivan.

Currey, a former deputy leader in the House, told Malloy her office will be higher in the adjacent 15-story building, a matter of some satisfaction, given the historic rivalries between Senate and House leaders.

“I told Sullivan, ‘I always wanted to look down on you,’ ” she said.

Sullivan said Currey has been a good landlord, arranging tours for his employees and showing off proposed color schemes – allowing DRS workers to veto orange walls before painting began.

The only downside for his department is the chore that comes with anyone who faces a move after more than two decades in one place: Getting ride of clutter.

“We’ve gotten rid of so much paper it’s not funny,” Sullivan said. “Truckloads and truckloads of paper.”